That is why artists, the more conscious they are of their “gift”, are led all the more to see themselves and the whole of creation with eyes able to contemplate and give thanks, and to raise to God a hymn of praise. (From the 1999 Letter of his Holiness Pope John Paul II to artists.)

Sir Stanley Spencer was a British artist who wanted to paint a picture dedicated to every single day Jesus spent in the desert, with the intent to show one on each day of Lent. We would like to honor this controversial and contradictory artist because we think he was animated by a great faith in God.

Jesus’ public life is interesting, not only for events of the time, recounted in the Gospels, but also because it concerns His physical presence on Earth. From the Pentecost on, we will instead talk about the spiritual presence of Christ. Therefore, let’s continue our journey through the places and the moments in which He was the protagonist because it is a way to know Him better.
We know that, in 27 or 28 A.D., John the Baptist had begun preaching about “one baptism for the forgiveness of sins,” a fact attested by the Jewish historic sources of Flavius Josephus and by the more recent documents from the archeological site of Qumran, which reveal the profound spiritual fervor that characterized the times in Judea. John baptized in Bethany beyond the Jordan as well as in the plain of Aenon, near Salim, south of Scythopolys. Jesus was baptized by John in Bethany.

The baptism marked the beginning of Christ’s magisterium, that is, his passage from private to public life. It was customary for the newly baptized person to withdraw for a period in the desert. In particular the Essenes, that is, the members of the Dead Sea Sect were known to do that. They used to live mainly in Kirbet Qumran. Some scholars do not rule out that there were contacts between John and Jesus and the Essenes. Some historians even maintain that Jesus was one of them, because of the doctrinal similarity between Christians and Essenes.

In any case, Jesus followed the custom and withdrew after his baptism for forty days in the Judean desert, north of Jericho. Here he was tempted by the devil, who even carried him to the pinnacle of the temple of Jerusalem. But Jesus overcame the temptation and, at the end of the forty days, returned to Galilee, while John continued preaching until he was jailed in Machaerus (in southern Perea), where he was executed.

Sir Stanley Spencer was a British artist who wanted to paint a picture dedicated to every single day Jesus spent in the desert, with the intent to show one on each day of Lent. Unfortunately, he was not able to complete his beautiful dream because he was approaching the end of his life. But he managed to finish eight of the eighteen preparatory sketches he had drawn.

We would like to honor this controversial and contradictory artist because we think he was animated by a great faith in God, notwithstanding the shadows that obscured his life. Even if he was even accused of indecency and of sacrilegious tendencies - charges that were never substantiated – Spencer has the merit of having humanized the figure of Jesus Christ, making Him closer to us.

Stanley Spencer (Cookham, June 30, 1891 – Cliveden, December 14, 1959) was an English artist. His work developed separately and far from the main modern art currents and constitutes a significant example of British art of the interwar period. 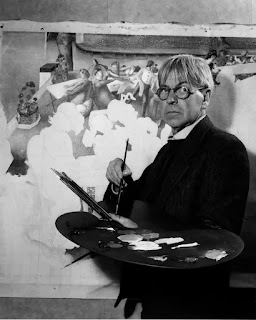 He was the seventh of eleven children in a family of artists and scientists. His father was a musician, his brother was a painter, and his grandfather was an astronomer. He began to draw at the age of fourteen and, in 1909, he enrolled in the Slade School of Fine Art of the University College London, after one year of preparation at the Windsor School of Art. There he met and became friends with Henry Lamb, the author of one of the most important works of British modern art: The Death of a Peasant (1910).

For three years Spencer was influenced by the Italian “primitives” and by the 15th century masters; influences that can be discerned in his works. After he returned to Cookham, he painted his village and, in 1912, he revealed his passion for biblical themes. He painted a beautiful Nativity: a painting that shows the double influence of French symbolism and of the British Pre-Raphaelites. But, soon after, with the pictures The Apple Gatherers, painted in 1912, and Zacharias and Elisabeth, painted in 1913, Spencer refined a very personal and daring style that separated his work from the idyllic and decorative look of those aesthetic models. The Resurrection of Jesus, which Spencer depicted in the 1914 painting The Resurrection of God and the Evil Ones, will become his favorite subject.

During the First World War, Stanley Spencer enlisted and began his military service from very low in the rankings. He served for four years at the Bristol War Hospital, where he carried out the humblest janitorial and laundry duties. The suffering and the rote of the job sharpened his spirituality and inspired in him works of great beauty and artistic value. Towards the end of the war, Spencer was sent to the Macedonian front. Between 1919 and 1926, after he had returned to his home in Cookham, he transferred his experience at the front into a series of works: Travois Arriving with Wounded at a medication station at Smol, Macedonia, and Camp at Kalinova.

He also painted several landscapes that express his joy to be back at home in England. The effects of the war on the growth of his work are clear. His personal style, now less naïve and extravagant, acquires power and originality and always shows an imaginative iconography.

Our attention was caught by the series of paintings mentioned at the beginning of this article, Christ in the Wilderness, which represent Jesus in the desert. 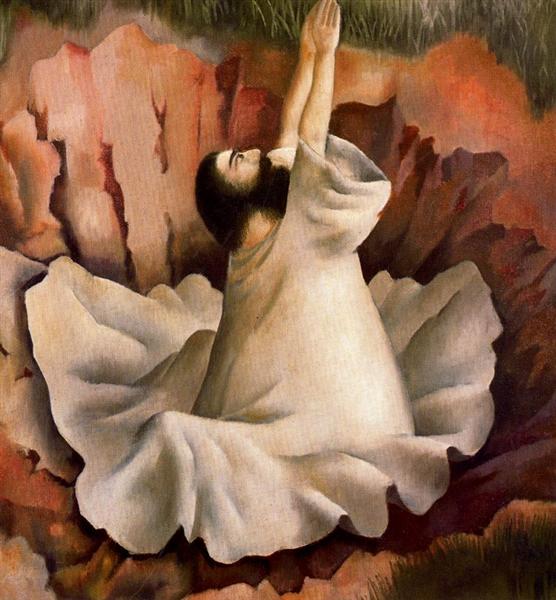 The pictures were made between 1939 and 1945 during a difficult conflictual moment in Spencer’s life. He lived in great poverty and confined himself in a barren room in London to realize his proposal of forty square panels illustrating, one per each day, the time that Jesus spent in the desert. The original idea was that a different panel was to be shown, on rotation, on each Lenten day.

Spencer made only eighteen sketches for the paintings, of which only eight were finally made into paintings. Sixteen of the sketches are in the Art Gallery of Western Australia that purchased them.

Besides the almost-plebeian physicality of Christ, Spencer’s pictures enchant us for his almost-primitive, naïf and very carnal representation of the Redeemer who, therefore, appears wonderfully human.

The monetary value of Spencer’s works skyrocketed thanks to a 1980 retrospective show of his religious paintings at the Royal Academy. For example, the 1958 painting Crucifixion demanded ₤1.32 million in May of 1990. It was an absolute record for a modern British painting, that would have astounded Spencer who had lived in poverty for so long. Carried by the valuation of Spencer’s religious paintings, his “secular” paintings also reached theretofore unseen record prices. On June 6, 2011, Sunflower and Dog Worship was sold for ₤ 5.4 million, breaking a new record that had been set a few minutes before by Workmen in the House.

The Last Supper (1920), Christ Carrying the Cross, The Betrayal (1922), and above all, The Resurrection, Cookham (1923-1936), Spencer’s masterpiece, shown at the Tate Gallery while he was still alive, are the most significant works of this period.

In 1923, Spencer began the preparatory studies centered on the war, and from 1926 to 1932, he worked at a series of wall-paintings for the Sandham Memorial Chapel. This series includes Resurrection of Soldiers, which reflects baroque and manneristic influences, while Drawing Water is distinguished by the Paolo Uccello’s drawing for the battle of San Romano. The murals of the chapels are considered some of the most important works of art of 20th century Great Britain.

But, true to his nature so full of contrasts, Spencer also painted Sarah Tubb and the ‘Heavenly Visitors,’ a painting that would be praised at the 1933 Carnegie International Exhibition, and created works based on Christian themes, such as the wonderful St Francis and the Birds and a Temptation of St. Anthony.

During the Second World War, while he was painting the series of works on the Christ-in-the-desert-theme, Spencer received from the War Artists Advisory Committee of the British government a large commission to paint a group of mural panels about the Glasgow on Clyde shipyards. It was in that period that Spencer returned to his favorite subject of the Resurrection of Christ, a theme that was often dealt with by Spencer in triptychs, in reference to the mystery of the Holy Trinity. For Spencer the Resurrection was an opportunity to show the reconciliation and the love among people and families. However, the scenes are not set in the Holy Land, as one could assume, but in the small town of Cookham where Spencer was born and spent a good part of his life. And one of the peculiarities of Spencer’s work is giving Cookham a celestial, heaven-like dimension, maybe related to the paradise that Spencer’s childhood was.

Therefore, Spencer’s religious work carries a miraculous meaning in relation to the redemption of humanity. And the city of Cookham, better than Rome or Jerusalem, allowed Spencer to condense it and sum it up in the form of a personal allegory. Through an imagery that evokes personal feelings and memories, he explored and tried to reach the most universal spiritual truths. Spencer’s most significant “style,” in fact, is the one of his spiritual works. It is a way of painting that show medieval inspiration, which refers to Giotto and Cimabue among others, and it is also the best known of Spencer’s styles.

Devotedly Christian, Spencer’s faith defined the subjects of his paintings as well as his brushwork and manifests itself in his art. We are just sorry that he could not complete his forty pictures about Christ in the desert. We would have had another way to acknowledge each day of Lent.

Many thanks to Janice A. Jenkins Pavese for reviewing the English version.

As always, every intelligent comment will be greatly appreciated.