A Trimotor for the Royal Navy

The Regia Marina, the Italian Royal Navy, had always been very eager to have her own air arm; and on the eve of the Great War Dr. Enea Bossi proposed to the Regia Marina a modified version of the Curtiss “America”, which was an American twin-engine flying boat that had been purposely built for an attempt to cross the Atlantic Ocean. The foreseen Italian order was for eighteen aircraft.


Various complications and numerous modifications caused the project to be abandoned in 1915. However, Dr. Mario Castoldi, in his wartime Report on Aviation in Lombardy (Relazione sull’Aviazione Lombarda), states that three examples of the Bossi’s aircraft were built by the Fratelli Zari (Zari Brothers) company of Bovisio Mombello (Monza).  Dr. Bossi, who had always maintained close relations with the Italian Royal Navy, had already been working on an alternative proposal based on a three-engine aircraft designed by Dr. Alceo Verza. The design of the airplane recalled the Caproni CA.3 but, according to Dr. Mario Castoldi, who notoriously did not like anything that did not bear his signature, the new aircraft: “…was very heavy, devoid of any interesting detail and offered great resistance to forward motion.”
The aircraft built by Zari Brothers had been originally foreseen as a seaplane but, probably to speed up the flight tests, the floats were replaced by a landing gear.

The crew chosen for the tests was composed by Sergeant Major Pietro Pettazzi, Master Test Pilot (and holder of the 10745 feet world altitude record with passengers) and flight engineer Giuseppe Maremmani, who were both employees of the Zari company.

According to the witnesses’ accounts, on January 1916, after the first flight (or, according to Castoldi, just after one taxi test-run), during a second attempt, due to the failure of one of the side engines and while maneuvering at low altitude: “…the airplane rolled inverted and began its awesome and tragic fall. The aircraft quickly fell to the ground making a large hole.” It was, for what we can understand, a typical turning stall, aggravated by the shutting down or by the failure of the inside engine. Castoldi noted that: “ …everybody’s opinion about the causes of the crash was that the engineer had intervened to control the power of the engines, which could not be easily controlled by the pilot due to the position of the levers; and that the pilot had not been able to correct the momentum caused by the asymmetric distribution of power.” 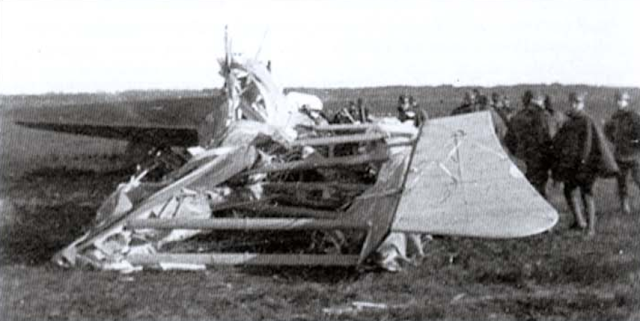 Unfortunately, nothing could be done for the two crew-members. There followed a long diatribe, that went on for months, about who was responsible for the expenses of the funerals and the cost of the coffins, built in the shops of Cascina Malpensa, which eventually were advanced by the officers of the flight school and the Cascina Costa air base.
Notwithstanding the unfavorable opinion of Dr. Castoldi and based on the few pictures that could be found, the Bossi-Zari airplane did not look like a badly conceived aircraft. Surely the aircraft paid the price of having been originally designed as a seaplane, but it appeared to be better streamlined than the contemporary Caproni Ca.3.
Compared to the Caproni airplane, the Bossi-Zari trimotor had 50% more power, thanks to her three Isotta Fraschini V.4 engines, for a total of cv 500, against the cv 300 of the Ca.3 (1 cv equals hp 0.985). The staggered biplane wing was also an innovative feature for that time, and worthy of mention are also the ailerons with increasing chord towards the wingtips. It is surprising, however, that the pilot had to rely on the engineer to vary the power of the engines, with the consequent delay and the possible misunderstandings due to the tandem arrangement of the seats and the deafening noise in the cockpit. However, the normal development of the prototype would have likely remedied these negative aspects. The accident however terminated the project.

It is interesting to note that, as early as 1915, Dr. Bossi had been testing, in the French Eiffel wind-tunnel, a model that judging from the pictures was a very advanced bomber with four Isotta Fraschini V.4 (later V.6) engines paired in tandem (an absolute novelty for the time).

After the end of the war, Dr. Bossi migrated to the United States of America, where he was active until the mid-1950’s.

Notwithstanding his chronicled activity, Dr. Enea Bossi is not a very well-known figure. After achieving his engineering degree, Dr. Bossi began to work in the aviation field right away, and commissioned from FIAM (Fabbrica Italiana Aerostati Milano, Italian Balloons Manufacturing Company Milan) a biplane glider, the Bossi-1 which, towed by a car, made a series of jump flights that were soon interrupted by a crash.
There followed the improved Bossi 2, designed in collaboration with Luigi Mojoli and powered by a 35 hp Züst engine which made a few straight flights in the late 1910.
But as early as 1909, Dr. Bossi had the opportunity to meet Glenn Curtiss at the Circuito di Brescia (Brescia Air Races) and became Curtiss’ representative in Italy.
Bossi then moved to the Bossi-3, a seaplane that was exported in a few examples in Brazil, which was followed in 1914 by the Bossi-4, designed by Rambaldo Jacchia with a cv 80 Gnôme engine, that sadly crashed on its first flight.
Following that, Bossi acquired the license of the French Borel seaplane and sold seven examples of those to the Italian Royal Navy for the Venice Flight School. He then commissioned the Zari Brothers the building of a few Curtiss A-1 Triad, under Curtiss license, followed by ten Flying-Boats, again for the Regia Marina. Unsuccessfully, he offered the Italian navy a version of the Curtiss America with domestic engines, arriving subsequently at the above-described Bossi-Zari trimotor airplane.
After the end of the First World War Bossi travelled to the United States of America and found employment in the American aviation industry. In 1927 he figured as the president of the American Aeronautical Corporation but, in 1937, he decided to return to Italy to work at the project of the human-strength-powered Pedaliante Bossi-Bonomi designed by Dr. Silva.

After that he returned to the United States and ended his career overseeing the building and the testing (but not the design) of the very interesting Higgins helicopter.

This is a translation of an article that appeared on the Italian magazine Ali Antiche, which is a publication of the GAVS, Gruppo Amici Velivoli Storici (Friends of Historical Aircraft Group), an Italian organization dedicated to the preservation of historically significant aircraft.
I hope you found it interesting. Your comments, as always, will be very appreciated.
Thank you,