They were enemies, Malusardi told himself; and in war one kills as easily as one can get killed. But seen from up close and observing his face printed on the light-reactive photographic paper, inevitably the man lost his status of political adversary and became just another man, who maybe had a woman at home who waited for him and maybe even children. Just a guy who looked at himself in mirror in the morning, shaving, detecting with some regret his new gray hair. Then he had breakfast, he lit the first cigarette and scanned the newspapers titles. From that point of view, the man didn’t seem like an enemy anymore; but in a few minutes Malusardi would put a bullet in his brain.
“I’ve got to do it,” he would have liked to explain to him “but it’s nothing personal.” Even though the filthy newspaper the reporter worked for had accused him personally of having been a member of the group who had killed the magistrate in Rome, while Malusardi instead was in Milan and did not even know the assassins. And another paper of the same political bent had published his name, address and telephone number, calling him a Fascist terrorist. It got to the point that his mother had to take refuge with some cousins in Como, because she got threatening phone calls at every hour of the night.
There was nothing personal but, in the end, Andrea would kill that damned reporter. Period. Mors tua, vita mea, isn’t that what the ancient Romans used to say?
The man walked passed the Estadio Naciónal, heading for the Tennis Club. He cut through the cheering crowd on its way to the bleachers. Some people were elegantly dressed, in jackets and ties; the women in pretty flowery dresses and hats. Some fans had a more common aspect; they wore t-shirts and casual shirts and held little flags. Malusardi noticed that all of them had European features: many of them were blond; while the wide and dark faces, with the typical Andean features, could only be seen behind the stands that sold flags, soda pop, popcorn, and boiled corn on the cob.
He entered a bar and ordered a coffee. Right after having hurriedly drunk it he went to the restroom, closed the tiny door and extracted the handgun. He wanted to check that everything was all right. He ejected the magazine. It contained six rounds. He racked the slide, closed it, and checked the trigger. He reinserted the magazine in the grip of the gun with a sharp click, racked the slide again and put a cartridge in the chamber. Then he de-cocked the hammer and put the gun back in his pocket. He was ready, although he felt a bothersome shake in his legs and felt strangely tired. 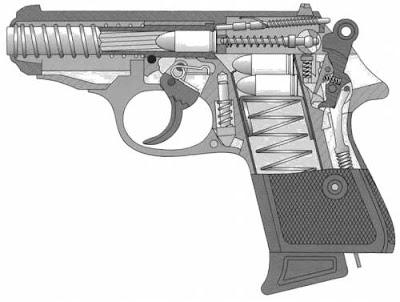 On the other side of the square, on a balcony of the Hotel Austral, Raffaele Mannucci put the binoculars down on the table, sighed deeply and picked up his glass, filled to the brim with scotch on the rocks. Sitting beside Mannucci, a man of about fifty with a moustache, dark glasses and a brown pinned striped linen suite, shook the hash off his Partagas. Mannucci took a sip, then another one. Sighed again deeply, then he emptied the entire glass.
“Well, it’s over,” he said.
“And everything went according to plans,” replied the man with the moustache.
“That’s right…”
“Satisfy one curiosity Mannucci, please: Why him? Had he betrayed you?”
“Not yet, General, but sooner or later he would have. He was a man who asked too many questions and had too many doubts.”
“A weak man, therefore.”
“No. A purist.”
General Gutierrez pulled on his cigar, then took a sip of his drink too.
“I can understand how you feel, Mannucci. This sort of things is never pleasant, especially because he was one of your own. But just think how useful this outcome will turn out to be for your organization. That man, Malusardi was suspected of the murder of that magistrate, wasn’t he? Well, we will discover the gun that was used in Rome in his apartment, and we will send it with our best regards to our Italian colleagues; so they will have a guilty man and maybe they will loosen their grip on the other comrades of yours.
“And you will dispel the suspect of providing a safe haven for Italian neo-fascist terrorists, and will look like the ones who are on the side of the law, even if it means protecting communist reporters.”
“That’s exactly right. As you can see, the sacrifice of your man will be very advantageous to everyone.”
Raffaele Mannucci poured himself another scotch and shook his head.
“Poor Andrea! I thought he was…shrewder.”
“He didn’t realize at all that our agent had replaced his cartridges with blank ones; but I have to admit that it wouldn’t have been easy, because our ballistic experts are very skilled.”
“He wasn’t very familiar with handguns. He could have never figured that out.”
“Well, on the other hand, before leaving this valley of tears, poor Malusardi was gloriously laid. I know Isabelita really well and, I assure you, she’s a volcano!”
The general burst out laughing with gusto and threw down the last gulp of Pisco Sour. Mannucci instead was silent, and finished his scotch calmly. In the distance, from the bleachers of the tennis club of the Estadio Nacional came a roar and a burst of applause.

The Davis Cup final, between Chile and Italy, had begun. 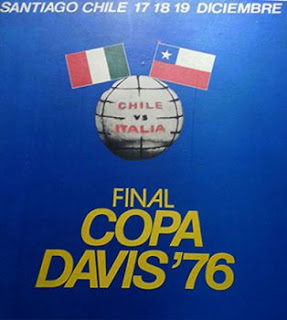 Special thanks to J.J.P. for reviewing the English text (and there is also a Part One, of course). L. Pavese.