Could have it worked on Malta? 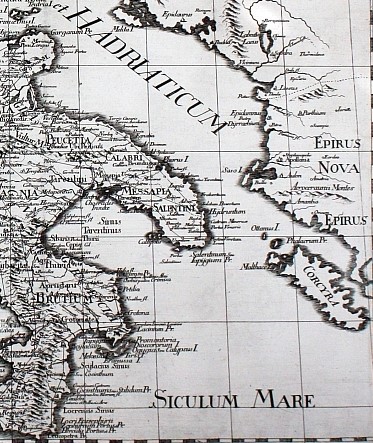 The Taking of Corfu.
By Roberto Gentilli (Translated by L. Pavese)

Corfu, or Kérkyra (Corcyra), is the northernmost of the Ionian Islands. Its elongated and sinuous surface measures about mi² 226 and lays just a few miles off the coast of Epirus, just south of the Strait of Otranto.

The high commands of the three Italian armed forces had begun to take into consideration the occupation of the Ionian Islands as early as in the summer of 1940, as the first phase of the military operations against Greece. The operation was code-named “G Emergency”, and the occupation was going to be accomplished by a landing of the Royal Army Infantry Division "Bari".

On October 13, 1940, General Badoglio transmitted to the Italian Royal Navy the advanced notice for the readying of the naval assets necessary for the landing, to which the Italian Royal Air Force (and specifically the 4th Squadra Aerea based in Apulia, and the Air Force of Albania) would provide the aerial cover. Nevertheless, on October 28, the day of the Italian attack against Greece, due to the adverse weather conditions the landing on Corfu was postponed; and it was delayed day after day, until Benito Mussolini himself cancelled it on November 2nd.

After six months of extremely hard fighting, in which the Italians fought with valor but paid for their aggression with very high losses, the German intervention, in April of 1941, destroyed in just a few days the resistance of the Greeks and of the British forces that backed them.

On April 20th, the Greek armies of the Epirus and Macedonia agreed to surrender unconditionally to the Germans, extending the armistice to include Italy on the 23rd of that month. At that point, the Italians put the invasion of Corfu back on the agenda, mainly to avoid that the fall of more territory in the hands of the Germans rendered the Italian sacrifices vain.
The Regia Marina, the Italian Royal Navy, got the plans they had devised six months earlier back in motion, but as early as April 27 a CANT Z.506 Airone of the 35th Stormo, overflying Corfu, launched a message ordering the Greek garrison to surrender, and observed that a white flag had been hoisted on the semaphore in response. Immediately, General Ilari, the commander of the 4th Squadra Aerea, phoned Rome; and after talking to the General Staff it was decided to entrust the capture of Corfu directly to the Royal Air Force.
The 35th Stormo, based in Brindisi, was a very peculiar Regia Aeronautica unit. It had been formed on the SIAI S.55, and then it had transitioned on the maritime bomber version of the Z.506. The commander of the Stormo was Colonel Enrico Grande, a very valiant and skilled officer from Apulia, who had already fought as a volunteer in WWI.
In his memories, the somewhat acidic Francesco Pricolo wrote that at the time of his appointment as Air Force Chief of Staff  "…besides the groups in my aerial squadron, only three or four among all the other groups in the rest of the Air Force could be employed trustfully, without the need of further training. The Stormo of seaplanes of the 4th Zone, led by Colonel Grande, was among them".
In fact, the Stormo had already been heavily engaged, first in the battle of Punta Stilo, during which Colonel Grande placed a bomb that failed to explode on the deck of the aircraft carrier HMS Eagle, and later in Greece, carrying out numerous bombing mission on the mountainous terrain of the mainland (with seaplanes!), and losing seven crews.
After having quickly coordinated the action on Corfu with General Ilari and with General Barba, who was the commander of the bombers of the 4th Squadra, Colonel Grande left from Brindisi with five seaplanes the morning after, on the 28th of April. 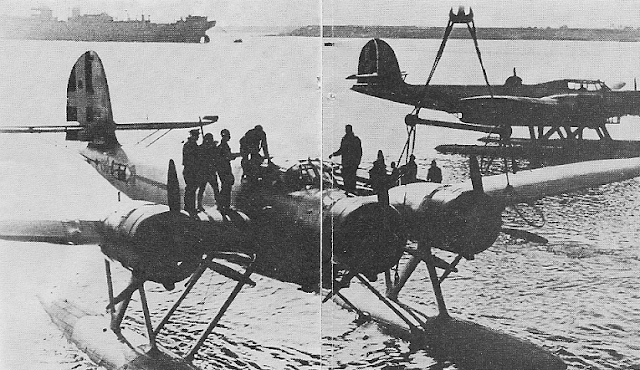 The small expeditionary force included a Consul of the Militia, Gianni Cagnoni, with nine Militia troopers, two Navy officers, two Army officers-interpreters and two war correspondents. After having reached the island, at about 9 o’clock in the morning, Grande launched a message on the Old Citadel, the ancient Venetian fortress on which the white flag had been observed the day before, ordering the surrender; but in response the Greeks hoisted a German flag!

It wasn’t an encouraging beginning, nevertheless Colonel Grande decided to alight on the water, off the beach of Mandukion.
Although the war against Greece was at the end, it was clear that the occupation of the island of Corfu was not going to be just a mere formality. To begin with, the island garrison, which consisted of 3000 well equipped soldiers, was well entrenched on the hills of the interior, which reached almost 3000 feet, and was not part of the Army of the Epirus that had already surrendered. Therefore, their intentions were unknown, and the possibility that they decided to resist could not be excluded. Furthermore, Corfu had been one of the secondary targets for the Italian bombers, when the interior of the country was obscured by cloud cover, and there was an unconfirmed report that the 41st Gruppo had hit a movie theater with a great loss of life; therefore, among the Greek population the anti-Italian sentiment was very strong. 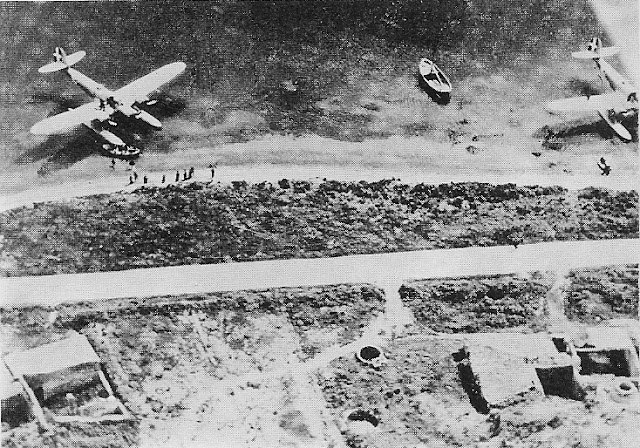 As soon as he had landed, with his small band of soldiers of fortune, Colonel Grande was approached by a few Greek officers. He demanded the surrender of the island and made them prisoners; then Grande reached the town of Corfu, where he raised the Italian flag on the old fortress. 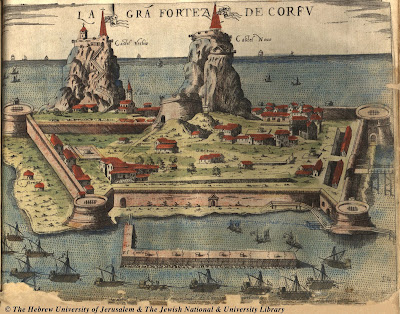 The situation, though, was problematic: the commander of the Greek presidio, Dimitros Polixes, was with his troops in the mountains, for an inspection, and his adjutant had managed to inform him by phone of the microscopic size of the Italian forces and then escape.
The Italians could have been overwhelmed and massacred at any time, but Colonel Grande and his men, with a good dose of impudence, managed to keep the situation under control. In the sky above the island, formations of Italian bombers flew uninterruptedly at low altitude, as a dissuasive deterrent to any inclination of resistance on the part of the Greek forces.

Among the bombers there flew the S.M. 79 of General Pricolo, who followed with trepidation the unfolding of the events from above. The Italians negotiated the surrender of the city with the Greek civilian and religious authorities, and in the afternoon the military commander of the presidio, to whom an ultimatum made credible by the airplanes had been given, was finally found. Meanwhile, four more CANT Z.506’s had landed twenty-four more Carabinieri and a few airmen.
The Greek commander declared he had already secretly negotiated the surrender with the Germans, and in fact a few Germans showed up on a motorsailer to see what was going on.
The Italians moved into the interior, capturing on the way a column of 300 Greek soldiers. The night passed calmly, and the day after the Greek commander finally agreed to surrender. An Italian infantry regiment arrived aboard two ships, reinforcing the occupational force, which remained under the command of Colonel Grande, who was the senior officer.

With two trucks and four requisitioned cars the force moved into the interior of the island and obtained the surrender of the three Greek battalions, meeting just a halfhearted resistance, which a burst of sub-machine gun fire in the air was enough to quell.

On April 30, 1941, the Italian Royal Army completed the occupation. In purely Italian fashion, Colonel Grande was transferred to Milan; maybe because he had proved himself too effective.
Besides the personal courage of the participants, the aerial occupation of Corfu was a great achievement for the Italian Royal Air Force. It was probably the first example of an enemy territory conquered by air power alone. Notwithstanding the hesitation of the Italian Royal Navy and Royal Army, the very rapid preparation of the plan, the coordination of the aerial formations that alternated over the entire day on April 28, and the radio communications provided by a Z.506 at anchor in the bay of Corfu, and by reconnaissance airplanes in flight, had been impeccable.

It begs the question if in the early days of the war a similar operation wouldn’t have also been possible in Malta. Five Z.506’s and twenty men wouldn’t have certainly been enough: The Britons in Malta were not in the same spirit as the Greeks of Corfu, who were furious but faced the reality of a war that for them by then was over.
Nevertheless, the same audacity could have also paid dividends in Malta, since the Italian airplanes could have obscured the sky of that island as well, and if it is true that the British already considered the loss of Malta inevitable.
History is not made with ifs and buts, but it is certain that people like Colonel Grande and his men wouldn’t have hesitated a second before alighting in the middle of the Grand Harbour.

This article was originally published on the May 1979 issue of the Italian aviation magazine JP4.
You comment, as usual, will be greatly appreciated.
Thank you.
Leonardo Pavese