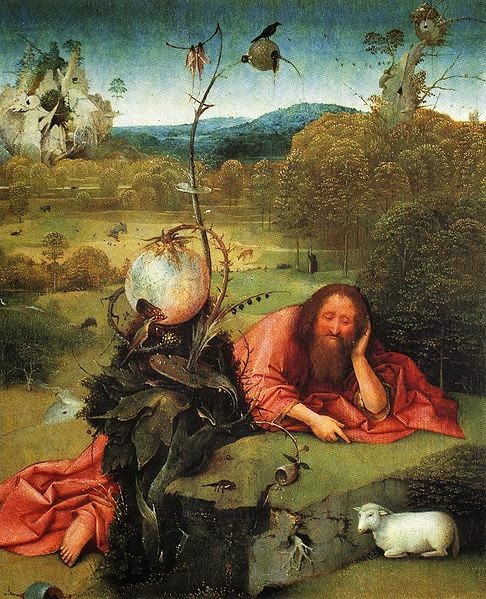 I would have liked to post this translation earlier, because the original piece was written for Advent, but I found it late and I could only post it now. In any case, there are still a few days.

ADVENT IS ALL IN THIS PAINTING BY BOSCH.
by Maria Gloria Riva.
(Translated by L. Pavese)

At the time of Advent, the figure of John the Baptist appears on the scene, shouting the urgency to prepare the way. According to the prophet Isaiah, he is yelling from the desert; but also into the desert, according to a plausible translation of the Gospel. And maybe this latter version is more suitable to our times, in which religious life (and monasticism in particular, of which John the Baptist is the symbol and patron saint) is screaming into the wilderness of a world that has no use for a Messiah.
In this Advent season, which marks the beginning of a year dedicated to the consecrated life, I like to remember a painting by Hieronymus Bosch (circa 1450-1516) that offers to us a  representation of John the Baptist completely different from tradition. He is not the ascetic eater of locusts, who wears rough camel hair.  Rather, he is a “fleshy” philosopher, languidly laid down on the ground, while he enumerates the virtues of the lamb that is in front of him.
The landscape is heavenly, but the threat looms.

The element that partially hides the prophet is a plant. The x-ray picture of the painting revealed that, here, Bosch had initially placed the profoundly devout benefactor, kneeling in front of his patron. We don’t know the reason of this sudden change of mind, but we know that the substitution was not by happenstance. Bosch, with his mastery, could have easily picked from an infinite range of plants in his substantial repertoire but instead he chose just a carnivorous one.

In the painter’s imagination, the carnivorous plant is the symbol of the voracious and devastating human passions that corrupt faith and customs. We could very well detect in this the  picture of our present society, in which the cultural wilderness appears to be the natural consequence of a life spent in bacchanalia, devouring all that can be guzzled down.
It is strange, though, how a 15th century man, like Hieronymus Bosch, did not choose to oppose an ascetic figure to this Epicurean voracity, but he opted instead for a philosophical model.
The reason could be found in the clients who ordered the work, who, though it is uncertain, could be the Brotherhood of Our Lady, a confraternity whose mission was the defense of true faith against emerging sects, especially the esoteric ones. Therefore, the modernity of the exhortation that springs from this work by Bosch is surprising. Faced with a modern culture, dominated by egotism and by the cult of the body, we need a different culture, dominated instead by a passion for a reading of history in the light of the truth of faith and of the Christian truth.

The carnivorous plant seems to swallow everything, even the rock against which John the Baptist is resting. But, in its voracity, the plant cannot see that behind the rock there is the Lamb, crouching like he were waiting for his time, and that the fruit of the plant is about to be devoured by a woodpecker with green hues.

The woodpecker, like many other animals, has a dual symbolic value of good and evil. The evil woodpecker is the symbol of heresy that, with insistence, empties the content of faith. But in the good sense, and especially when the bird is hued with green, it symbolizes rebirth. The woodpecker is a symbol of Christ himself, who patiently searches for the presence of the Evil One to eradicate it.
The lamb that sits behind the rock, instead, is the symbol of meekness that triumphs against brute force. Though the rock that is about to be devoured is the Church and, specifically, the rock of Peter (that is, the Papacy), Bosch discretely reminds us that the Church is not founded on the will of the people, but on God’s will and on the winning card of sacrifice.
The sacrificial lamb is actually telling us that, in the exact moment the killer exults for having finally reached the prey, victory is celebrated. Precisely at the moment of the crucifixion, therefore at the moment of apparent defeat, Christ celebrates victory over evil and death. That’s why, while the carnivorous plant is at the peak of its luxuriance, the woodpecker, the truth of Christ, defended by John the Baptist, devours it.
This year, may the religious life renew its missionary vigor; and may it find again its force of attraction, especially in defense of the truth of the faith and in the spreading of a culture capable of undermining from within the modern anti-catholic and anti-human philosophies. 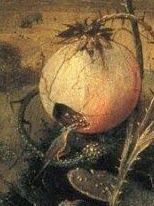 The article appeared originally on the Italian on-line daily La Nuova Bussola Quotidiana, and it was posted here with their permission. Sister Maria Gloria Riva is an Italian Catholic nun who studies, writes and lectures about the connection between art and spirituality in the Catholic Christian tradition.
I'd like to thank J.J.P. for reviewing the English text.
Your comments will be greatly appreciated.
Thanks
L. Pavese