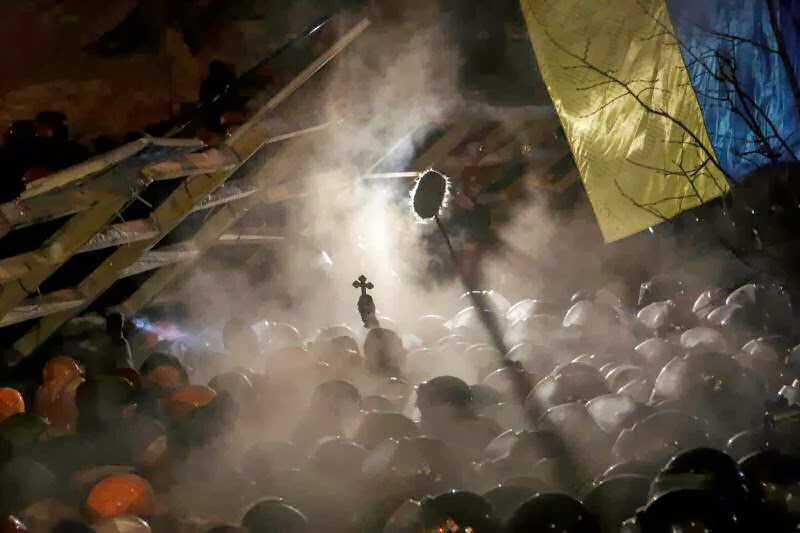 "Ukraine," in the old Slavic language, meant "the borderland," or "the frontier." Today the old name acquires a new meaning, while  anti-government protesters are in the streets, demanding a closer relation with western Europe, to which they feel the Ukraine culturally belongs, and demonstrating against what they perceive as a pro-Russian stance on the part of President Yanukovich. The Ukrainian Greco-Catholic Church, which has re-emerged after almost a century of communist persecution, is trying to play a pacifying role, during these turbulent times in the "borderland," but it is essentially still perceived as a "foreign influence," and it is running the risk to be driven underground again.
The following article, by Stefano Magni,  is interesting, because many conservative Catholics in western Europe (certainly in Italy), faced with the secular, atheist drift taken recently by the European Union, which is becoming more and more intolerant towards Christian values, look to Russian President Vladimir Putin, and to the Russian Orthodox Church, as the last defenders of Christianity in the Old World (and also because President Putin represents an obstacle to what they perceive as the hegemonic aims of the "liberal" United States, which they detest.) In this sense, the Ukraine is once again the frontier land in which, this time, East and West, and the two great Christian traditions are redefining their relationship.

Ukrainian Catholics, from the Catacombs to the Barricades    By Stefano Magni

In the Ukraine, the head-on confrontation between the government and the pro-European opposition is continuing; far from dying down, tension is still high, seven people already died, hundreds were wounded and the barricades are still up, challenging the Berkut, the Ukrainian police. Sviatoslav Shevchuk, the Major Archbishop of Kiev-Haly (a title that in the Eastern Church equates to Patriarch) has been one of the main protagonists of the negotiations between the Ukrainian opposition and President Yanukovich.

The Archbishop is the head of a very well rooted and active religious community, the Ukrainian Greco-Catholic Church (UGCC), which is the largest of the Eastern churches and has contributed to shaping the Ukrainian national identity in the course of the centuries.
The Greco-Catholic Church was persecuted for the greatest part of the 20th century when the Soviet regime was ruling the Ukraine, and during these past weeks of protest it has been running the risk to be driven into the catacombs again. The priests of the UGCC bring spiritual relief to the protesters, who are barricaded in Kiev’s Independence Square. “The Church is on the side of the people,”  Archbishop Shevchuk has repeated, during the last few days.” The role of the priests “has been fundamental in placating the mood of the population and trying to maintain the overall peaceful character of the protest,” he declared, last week, to the microphones of Vatican Radio. But even the pacifying role of the Ukrainian Eastern Church is arousing suspicion, to the point that the pro-Russian government is discussing the possibility of outlawing the UGCC. 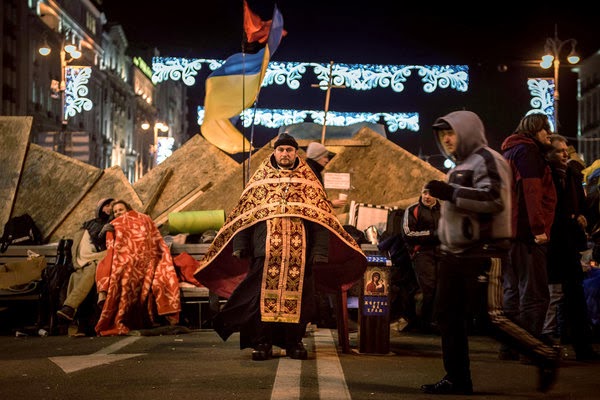 On January 10, 2014, a firm order was received from the Ukrainian  Ministry of Interior that forbade Ukrainian Catholics to celebrate Mass for the protesters, prohibited them from participating in the demonstrations (even as private citizens) and from organizing processions and religious ceremonies without permission from the authorities. The pro-Russian government of Viktor Yanukovich fears the independence of the Ukrainian Catholic Church and the ties between Msgr. Shevchuk and Pope Francis. (Msgr. Shevchuk co-operated with then Cardinal Jorge Bergoglio, in Buenos Aires, when Shevchuk was the spiritual leader of the Argentinian Greco-Catholics.) To sum it up, as far as the government in Kiev is concerned, the UGCC is a foreign body; and at a time when the Ukrainian  parliament passed a law condemning non-Ukrainian NGO’s (Non-Governmental Organizations) as “foreign agents,” the Church that is faithful to Rome is running the risk of falling under the axe of censorship.

Monsignor Lucean Muresan (the Romanian Greco-Catholic Archbishop) declared: “It seems that the Ukrainian Greco-Catholic Church has become the target of hateful attacks, in a context in which Christians, who are also citizens, want nothing but to live together in a free and democratic  country, without lies, corruption or violence. We express our concern, for the threats against the Ukrainian Greco-Catholic Church that still remembers, as we do, the religious persecutions, which now, unfortunately, seem to be reappearing over the horizon,  in the country that borders ours.” 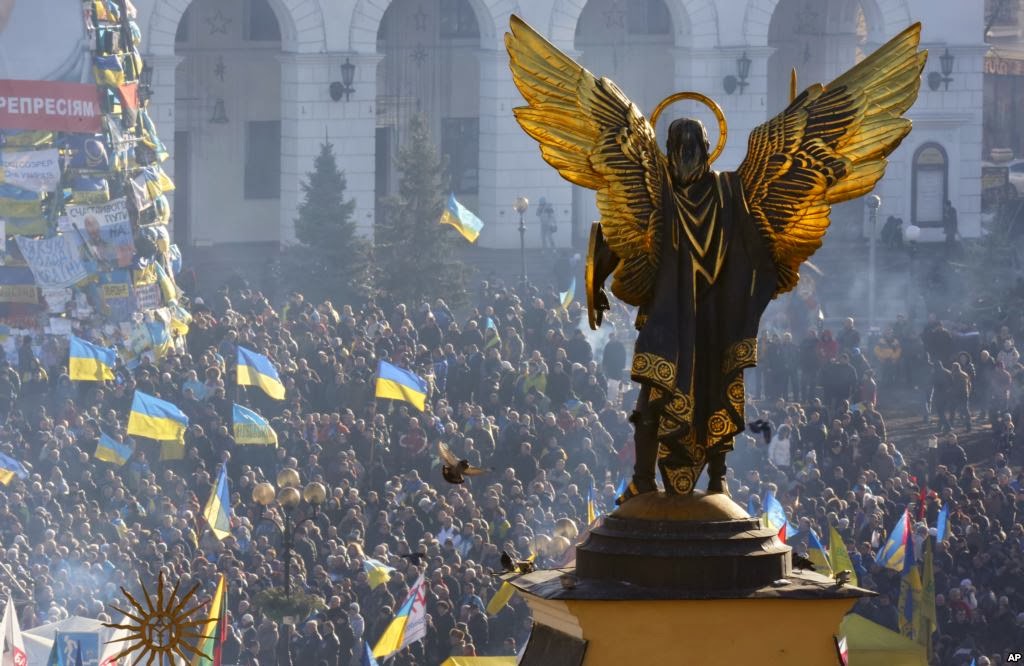 But, why, right when the confrontation between an increasingly secular European Union and the Catholic Church is becoming harder and harder, are the Ukrainian Catholics siding with an openly pro-European Union movement, to the point of risking religious persecution?
“Ukrainian civil society was virtually wiped out by Communism. During the Ukrainian protests of the past two months we witnessed the spontaneous resurgence of civil society, for the most part led by young people who have no memory of Communism, but realize that the present ethical and cultural conditions of their country are intolerable; let alone the state of the economic and the unfortunate political situation,” explains Dr. George Weigel  “Among the leaders of these young pro-democracy protesters and human right activists there are students and graduates from the Ukrainian Catholic University (which is the largest catholic institution in the former USSR), who have acquired their human dignity as men, women and citizens from a university that takes character formation as seriously as intellectual education.” Dr. Weigel takes care to point out that “the Ukrainian popular uprising, at the end of 2013, was not provoked by an unquenchable thirst for MTV shows, or other expressions of Western decadence, but by a deep desire for truth, justice and basic decency in public life. The Ukrainian Greco-Catholic Church is now fully engaged in shaping the moral future of the country. This courageous Church deserves the solidarity of Catholics from around the world.” 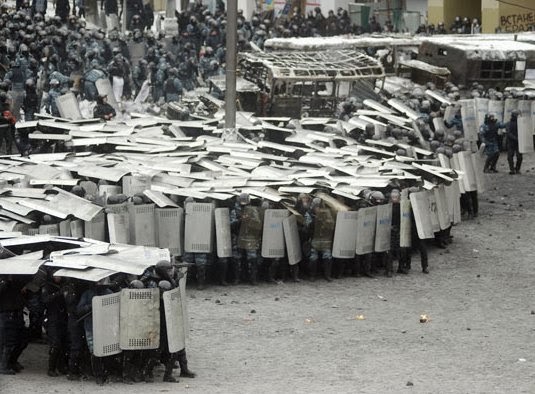 This is not just a recent phenomenon. This Eastern Church incarnates the most European-like spirit of western Ukraine, because it has always been an integral part of Habsburg central Europe. The Church was born in the stormy period following the occupation of the land by the Lithuanian-Polish Commonwealth, when Poland was partitioned among Prussia, Russia and Austria. In the late part of the 18th century, the Church was rescued and given dignity by the Habsburg dynasty, while it was literally wiped out by the Orthodox czars in Russia. Therefore, during the 19th century, the Catholics of that portion of the western Ukraine that answered to Vienna, and not to Moscow, remained very faithful servants of the Habsburg empire. Attracted, as they were, by nationalism, in the late 19th century Catholics contributed to the creation of the new national identity of the Ukraine; but at the end of the first world war, with the dismemberment of the Austro-Hungarian Empire, the Greco-Catholics found themselves divided in four different countries: the Ukraine, Poland, Romania and Czechoslovakia.
When the Ukraine became part of the Soviet Union, religious persecutions resumed and intensified under the rule of Stalin, who actually tried to give a look of religious legitimacy to his desire to eradicate Catholicism from the Soviet territory. In 1946, the “Council of Lviv-Sobor” (Leopolis),  organized by the Soviet political police, outlawed the Greco-Catholic Church. The Soviet Union managed to divide Ukrainian Christians, and set the ones against the others once more, while persecuting all of them at the same time. Catholic property was seized and given all to the Russian Orthodox Church, the only church that was recognized by the state, even though it was deeply infiltrated by the police. To this day, the Patriarchate of Moscow considers canonical the rulings of the Council of Leopolis.

Many Catholic priests and bishops were deported and interned in the gulags. But the Church survived. Priests persevered in their faith till death, giving a unique example of courage, celebrating Mass in the cells or in the factories of the prison camps, in the deportation trains and in the mines, facing martyrdom rather than submit. The greatest Eastern Church therefore became the largest underground Church in the world, gaining followers in desperate conditions and expanding the number of its faithful in the Soviet catacombs.
The Metropolitan Josyf Slipyj (1892-1984) became a model of resistance. He managed to survive eighteen years in a prison camp and returned to reorganize the Church. He was appointed cardinal in pectore in 1949, when he was still a prisoner, and Pope Paul VI named him Major Archbishop in 1963, the same rank of his successor Shevchuk.


Josyf Slipyj led a Church that was not free and was dispersed abroad. Baptizing, celebrating Mass, confessing, celebrating funerals or even just having a religious meeting, under the Soviet regime were all crimes, punishable with imprisonment. An anonymous tip from an envious neighbor, or the suspicion to have a copy of the New Testament at home, were enough to be deported.
Freedom arrived only towards the end of the reform period of Secretary Gorbachev. In 1898, the Ukrainian Greco-Catholic Church became legal again, even though it still had to continue fighting for years to get back the assets that had been taken by the Russian Orthodox. Twenty-five years have gone by, and the memory of persecution is still very fresh. The fear it will start again, and the determination to resist, are stronger than ever. 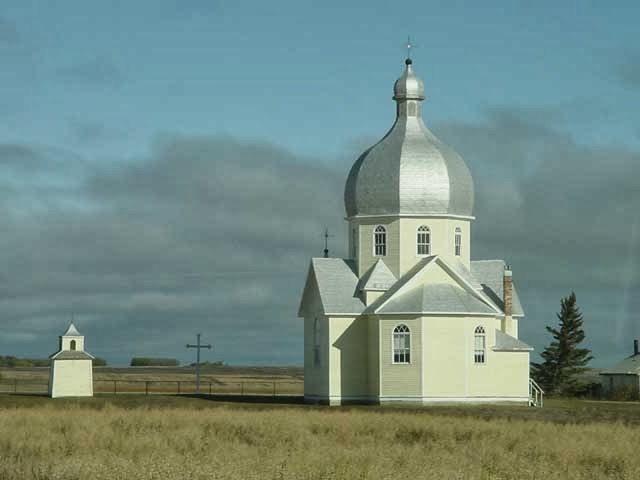 This article by Stefano Magni was originally published on the Italian on-line daily La Nuova Bussola Quotidiana, and was translated (by me) and published here with their permission. (I'd like to thank J.J.P. for reviewing the English text).  And if you'd like to read another good article on the on-going Ukrainian crisis, by another good Italian reporter, please go to The Homemade War of the Ukrainians.
You comments will be greatly appreciated.
Thank you very much,
Leonardo Pavese