By Roberto Gentilli (Translated and edited by L. Pavese)

To leave an established company like FIAT, in 1932, during a great depression that was impoverishing Europe, was not really a good idea; to leave the company to become an aircraft designer was surely madness. But Alberto Jona did exactly that, and the result were a  few very interesting aircraft.
Jona was born in 1904, graduated in engineering from the Politecnico of Turin and in 1928 joined the Ufficio Tecnico Motori di Aviazione FIAT (the technical department of FIAT Aviation Engines division), where he worked at the fine tuning of the A.S.3 engines for the Schneider Cup race.
In 1929 he went to Calshot, in Hampshire County, U.K., where he followed the unsuccessful try-outs of the M.67 and C.29 seaplane-racers, and subsequently he worked at the preparation of the A.S.6 engine for Francesco Agello's record flight. He later transferred to the design bureau, under the direction of Celestino Rosatelli, and finally went to CMASA, in Marina di Pisa, where in cooperation with Guidi and Stiavelli developed the maritime reconnaissance aircraft M.F.4.


At the age of 28, while the design center of Marina di Pisa was being disbanded, Jona ventured out on his own, setting up a design office in Rome, and began to work at an ambitious project of an aircraft with unique characteristics, which eventually became the Jona J.6.

In the period between the two world wars, the aeroplane, which during the fast pace times imposed by the needs of the First World War had settled on its classic shape (one propeller in front and a tail in the back; two semi-wings with ailerons; one rudder and one elevator), was experimenting with new solutions: flying wings, canards, lifting bodies, variable geometry wings and even variable geometry airfoils.


One issue that was studied particularly well was the possibility of a simplification of the controls; because, at the time, the simultaneous coordination of ailerons, rudder and elevator was considered an unnatural complication.


The J.6. was a sesquiplane with an upper parasol wing that, instead of being rigidly connected to the struts of a cabane, was hinged and free to pivot around its longitudinal axis, to a maximum angle of bank of 10⁰.


The ailerons were automatically controlled by a linkage connected to the cabane. When one wingtip rose, the aileron on that side also rose, and the one on the opposite side was deflected downward, counteracting the movement of the wing and returning the wing to a level attitude.


Therefore, the fuselage was essentially hanging below the pivoting wing, under which it was free to oscillate like a pendulum; and the aircraft was capable to maintain lateral stability on its own. 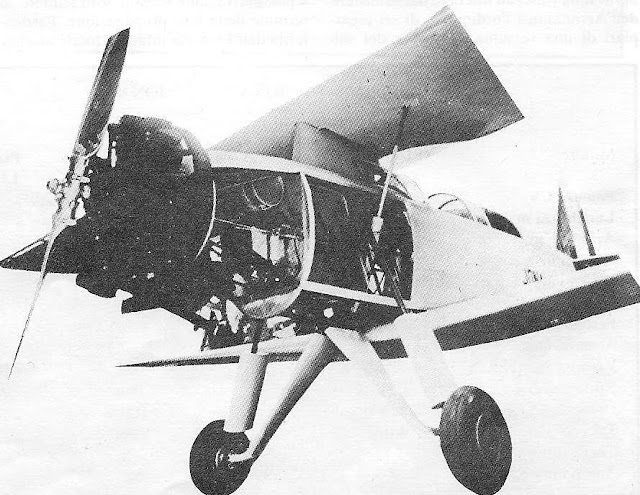 The wing was also equipped with Handley Page slats, which extended automatically at a high angle of attack, preventing the wing from stalling.


There were also two “interceptors", that is, two thin slats which extended almost vertically (in case a critical attitude was reached) between the leading edge of the wing and the trailing edge of the Handley Page alulae. These thin slats acted as “lift spoilers” on that side and  assisted the authority of the aileron.

Two telescopic struts, equipped with dampers, were mounted on each side of the fuselage and contributed to limit the oscillations of the parasol wing. (The struts can be clearly seen in the above picture of the J.6 without the side panels). Therefore the aircraft guaranteed easiness of control, a “shock absorbing” flight, and it was stall and spin proof.

The two lower semi-wings were of slightly different size, to counteract the engine torque.
Flying in instrument conditions was going to be theoretically simpler, because of the inherent stability of the aircraft. At that time it was suggested also that, between the two crew members, one could have concentrated on directional control and the other on maintaining altitude. Both tandem cockpits were provided with all the necessary instrumentation, and they were connected by an interphone.


The tilting wing could also be blocked, and in that case the aileron control reverted to manual. The blocking system was developed by the Magnaghi company, and it could be actuated with the wing in any position. When the wing was blocked in flight, it could only move towards the centered position, and no longer towards a more banked attitude, until it stopped after having reached the centered position.

The building of the J.6. was entrusted to the Piero Magni Aviazione company of Taliedo (Milan). At the end of 1935, the aircraft, bearing the military registration MM 313 (because it had been commissioned by the Italian Royal Air Force, after it had aroused the interest of the Chief of Staff, General Valle), was exhibited at the 1st Milan Aeronautical Expo. On that occasion, the cabane was covered with a fairing which was later eliminated to avoid vibrations.

The first flight of the J.6 took place on May 24, 1936, with its tilting wing blocked. Magni’s test pilot, Mr. Vasco Magrini, should have been at the controls, but he was replaced at the last minute by famous racing pilot Leonardo Bonzi.

The insurance company had telegraphed a message, stating that since Bonzi was not officially a test pilot the insurance policy on the plane was void. But the telegram arrived when the aircraft was already aloft.
Later, the Italian Air Force made available another pilot, Roncato, a military officer and Breda’s former test pilot, who made the early flights with the operating tilt-wing, with very good results.
The Jona J.6 was equipped with a 140 hp FIAT A 54 radial engine, and a metallic Magni propeller with ground-adjustable pitch. The fuselage had a frame of welded chrome-molybdenum steel tubes, covered with aluminium sheeting and fabric. It housed two seats in tandem, with dual controls, under a single canopy.

Both the upper and lower wing were of wooden construction, with box-like spars in spruce and plywood, and a wooden stressed covering, which assured good rigidity to the high aspect cantilever span.
The lower wing too was provided with ailerons that could also be deflected simultaneously to act as flaps.
The empennage was wooden and it was not counter-weighed. The angle of incidence of the stabilizer could be varied in flight. The landing gear was equipped with brakes and oleo-dynamic shock absorbers.

The aircraft enjoyed great celebrity, and it was reviewed with much interest by the international aviation media. After the test-flights in Taliedo, the J.6 moved to the Centro Sperimentale in Guidonia (Rome), to be evaluated by the military. In 1937 it was assigned to Leonardo Bonzi, for a few competition flights. Bonzi flew the aircraft in that year’s edition of the Giro Aereo d’Italia, and in other races, during which, beside the military insignia, the aircraft also sported the civilian registration I-BONZ.
The aircraft was later entrusted to its manufacturer, who used it extensively, without any problem, until it too disappeared, like many other interesting aircraft, after September 8, 1943.

Thanks to the good results of the J.6’s test flights, Alberto Jona was able to obtain, from the (Italian) Ministry of Aeronautics, the order of six aircraft, in a flight training version that was denominated J.6-S (Scuola).
While the nice characteristics of the original J.6 were retained, such as the high aspect cantilever upper wing, the high quality finishing of the construction and the very well thought-out cockpits, the most innovative feature, that is, the free tilting wing was discarded by the Royal Air Force. The aircraft order by the military was a conventional sesquiplane. Also, the lower wing was devoid of the flaperons, and to control the angle of bank the aircraft relied exclusively on the ailerons of the upper wing.

Nevertheless, the aeroplane retained something original: the struts that supported the upper wing (which was still equipped with the Handley Page alulas and the “interceptors") were no longer telescopic, but were mounted on shock absorbing rubber blocks within the fuselage, which allowed a limited oscillation of the wing and dampened the vibrations.
The J.6-S had originally been designed around an in-line engine, but it received instead a 240 cv (kW 176) Alfa Romeo D2-C30 radial engine with a lobe-type Roots supercharger, and a metallic propeller with ground adjustable pitch.
The aircraft was provided with all the equipment necessary for military training, such as a lighting system for night flight, a fuselage mounted mm 7.7 (.303 caliber) Safat machine gun, and it could also be equipped with a gun camera or a photographic camera.
The cockpits were covered by a canopy that opened laterally, and could be removed for aerobatic flight.
The use of a breathing apparatus was not foreseen by the Air Force, but an oxygen system could be mounted, as well as a radio.

Basically, the airframe of the -S was identical to the J.6’s, besides a few improvements, such as a tail-wheel in place of the original tail-skid, and a general strengthening of the structure to comply with the required load factor for military training aircraft.
The flight characteristics of the J.6-S were good: the aircraft had a service ceiling of more than 26,000 feet, it could fly at 130 knots and it was extremely maneuverable and docile at the controls.
The six aircraft, which had been commissioned in 1937, were built in Taliedo by Piero Magni Aviazione, and were all delivered within 1939, with military registrations numbering from MM 50723 to 50728.
The airplanes were assigned to the Reparto Volo Stato Maggiore (the Air Force General Staff Wing) in Centocelle (Rome), where they were extensively employed by the superior officers for liaison duties and to comply with the minimum flight requirements.
They were all lost in the course of the war and the events that followed the shameful Armistice.

This article originally appeared on the March 1980 issue of the Italian aviation magazine JP4. I hope you enjoyed it. In this post we talk about another interesting aircraft by Alberto Jona, which in this case falls into the woulda-coulda-shoulda category. Your comments, as usual, will be greatly appreciated. Thank you,