Should what you write be extemporaneous or patiently reviewed?


By Roberto Vacca. (Translated into English by L. Pavese)

It appears that Ernest Hemingway rewrote the last page of his novel A Farewell to Arms twenty-six times. To me that always seemed an exaggeration. The novel was good, but it wasn’t so very excellent to justify such perfectionist care. Nevertheless, I began to ask myself if there weren’t a relation between Hemingway’s compulsive reviewing and the fact that he was awarded the Nobel prize for literature.

Many decades later, in the introduction to his book The New Industrial State, John Kenneth Galbraith wrote: “My writing begins to appear spontaneous only after the fourth or the fifth revision”. The book was interesting. It described the techno-structures, denounced the anachronism of antitrust laws and pinpointed the lack of modern culture as one of the causes of unemployment. It’d be worth to read it again. When I read it I was forty years old, and I found Galbraith’s note irritating. I said to myself: “What’s the need for so many revisions? If you know what you want to write, think it over beforehand, so you won’t have to review it so much.”
I had already published two books that were written that way. I pondered over every sentence, for a long time, till it satisfied me; then I didn’t change a word. The books weren’t bad, but I could have greatly improved them. I realized that, when Mr. Donato Barbone (who was the Literary Associate-Editor and Secretary General of Mondadori Editore), very kindly, spent many hours with me revising and correcting the manuscript of my non-fiction book The Coming Dark Age. We broke some sentences up, and erased some others (even entire paragraphs and two chapters). We changed words. We eliminated useless quotes and references. We turned passive sentences into active ones. Besides improving the style of writing we discussed the content, erasing mistakes and non-sequitur. It was a very good education for me.
In the following years I became interested in the reading ease of texts, and I introduced, in Italian, the index devised by Rudolph Flesch for English prose. Doing so I learned to produce texts that were more easily readable. One learns also by doing; therefore I improved considerably the level of my communications writing technical reports, newspapers articles and several books. Doubtless, the editing of a text improves its quality; but editing is best when it’s practiced by professionals who cooperate with the author. In the English-speaking countries there’s a long editing tradition. In Italy there are some very good editors, but in the past I’ve also encountered a few pitiful ones, who even worked for publishers with a good reputation.

This long premise of mine aims at inspiring diffidence towards all improvised communication. People who engage in it have no time for editing their message, let alone to think about what they’re writing. Insisting on the advantages of mobile internet connections implies that communicating and exchanging  messages is always a good thing, even when one is travelling, in motion, or when is standing on one foot. I deny that. I’d advise you instead to refrain from using blogs and connections on which people chat in real time. Those are connections that are only good for irrelevant chatting. Let’s forget about them, and concentrate on relevant, thoughtful and meditated statements.
After three centuries, we’re forced to agree with Metastasio, even if the verses aren’t really that good; especially if one doesn’t like seven-syllable lines:   He wrote:  “It’s useless to try to recall the voice that escaped from your breast. One cannot stop the arrow when it has left the bow.”
Let’s take advantage instead of the e-mail, which has the useful trait of being asynchronous. We send an e-mail when we feel like, the recipient reads it when it’s convenient for him or her, and answers in due time.
In the American offices of IBM on every wall there used to be a sign that read:
THINK.
In  the Italian offices of IBM, the sign was
RIFLETTETE --- MEDITATE. 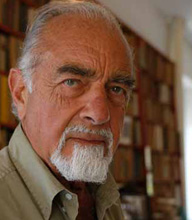 By training Roberto Vacca is an engineer and a computer scientist (I believe he was among the first to be trained on how to operate and maintain a computer in Italy, and he lectured in what now would be called Computer Science, at the University of Rome, until the mid 1960's); but Dr. Vacca achieved prominence as a science writer, and a novelist. (By the way, his books may be downloaded, in Italian and English, here. On the same site you'll find a link to his personal website, on which there's a more detailed resume, like we say in the U.S., or CV, if you pretend to speak Latin). He contributed regularly to many Italian publications and television shows, and now he publishes a newsletter that one might request by contacting him. In recent years, besides continuing his work of explaining scientific and economic issues, he has been insisting on the importance of scientific education and research in the development of a society. (Specifically in Italy, that is lagging behind in those fields).
On this blog I have already translated two of his interesting articles: one is about the mechanics of a body falling from great heights, which you'll find here; the other is about war.
Your comments, as always, will be greatly appreciated. Thanks,