April 19, 2012
I’m very pleased Roberto Vacca let me translate and publish this short article on this blog.
Dr. Vacca is not only the most important Italian science author and popularizer of the last fifty years; he also writes about culture, ethics, politics, international relations, self improvement, religion. His contributions are always well informed and backed by his vast knowledge and integrity.

If you are interested about reading more about this important italian author, please go to his website: http://www.robertovacca.com
Many of his books, some translated in English, can be purchased and downloaded from:
http://www.printandread.com/
On this site you will find a collection of many of his articles, in Italian:
http://www.ilcrocevia.net/
I hope the following short article will introduce this author to the English speaking readers who still don’t know him.
Your comments will be greatly appreciated.
L.Pavese 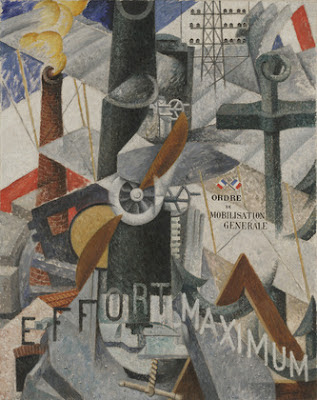 
Total war aims at destroying an entire country: its cities, the civilian population, its infrastructures and its resources.
On August 8, 1945, the governments of France, the United Kingdom, the United States of America and the  U.S.S.R. formally agreed, (with the London Charter, otherwise known as the Nuremberg Charter), that gearing up for total war was an international  crime against humanity and world peace.

In an “asymmetrical” war, one party (usually the weaker one, for example: a rebel guerrilla movement), strikes at the other faction’s vulnerable spots, compensating for their deficiencies in terms of number and quality of weapons.
In 1939, the Wehrmacht (the German unified armed forces in World War II, ndt)  unleashed an asymmetrical war, relying on the precision of the Junkers 87, the Stuka (abbreviation of Sturzkampffluegzeug, dive bomber)  and on the high mobility of its troops.  However, they underestimated the potential of the other warring countries: in 1939, the German production of steel amounted to  23 Mton, (23 million metric tons). The British, French, Soviet and American output was 89 Mton. In the mid to long term, the ratio between the forces was asymmetrical to the Reich’s disadvantage. (It could be argued they started the "Lightning War", precisely because they were aware their potential was inferior. ndt)

If Hitler had concentrated on improving his armaments for a few more years, he would have had at his disposal the Tiger tank at the beginning of the conflict, instead of having to wait for it for three years. He could have improved, with radar guidance, the V1 and V2 flying bombs (V from Vergeltungswaffe, retaliatory weapon).  Instead, between August 1944 and March 1945, 35,000 of those killed 9,000 Britons but had no military impact.

The Germans could also have produced nuclear weapons, overpowering the Allies on land, sea and sky. Luckily they were outclassed in every field.
As early as 1921, the French magazine Je Sais Tout published a description of the battle of Midway, between Japan and the United States of America, arguing that the aircraft carrier would be the decisive factor. The Germans did not understand that.  In 1939 they didn’t even have one.
[Actually, Germany had launched the Graf Zeppelin aircraft carrier, the first of two they planned, in 1938, but never completed it. The Rheinmetall  150 millimeter guns were taken to newly-occupied Norway, for coastal defense. When they finally realized they needed the carrier to provide aerial coverage to their battleships, to be able to operate outside the confines of the Northern Sea and the Baltic Sea, they didn’t have suitable aircraft. The modification required to employ modified land aircraft, which included a naval version of the Stuka with folding wings, further delayed the completion of the ship until it was decided to terminate the program.
Italy also launched an aircraft carrier, the Aquila, on which the Italian Royal Navy planned the use the catapults developed for the Graf Zeppelin. This vessel was not ready either at the time of the Italian Armistice.   L. Pavese.]

The Germans tried, with a late surge of ferocity, to turn the Blitzkrieg into total war, but they only obtained the destruction of half Europe and the convictions at the Nuremberg trials.
Today the comparison between opposing forces doesn’t make much sense. The maximum destructive potential is in the hands of the United States of America and the Russian Federation. A nuclear attack launched by France, the United Kingdom, India, Pakistan, China or Israel, (although Israel never admitted nor denied to have nuclear weapons), would be futile and crazy.
The fear that North Korea and Iran might have nuclear weapons is justified, but I’ve been maintaining for years that the most serious risk is the possibility of a nuclear war started by a mistake or a fault in the control systems.
We should demand total disarmament.
The environmental movement should fight for it too, instead of shouting: “Nuclear energy? No, thanks!”
In the meanwhile, let’s consider the possible risks that the extraordinary growth of the largest nation in the world poses. China is growing rapidly in technology, economically, in science and industry. Today, the production of steel is not as relevant as in 1939; but it’s noteworthy that China is in first place, with 680 Mton per year. Europe is at 177, Japan 107 and North America at 118. High technology carries more weight, and China excels in that too.
The Chinese spend 2% of GDP (Gross Domestic Product) for defense: 160 G$ (160 billion dollars), as opposed to the 740 G$ of the U.S.A. (which is reducing the expenditures). France, the Russian Federation, Saudi Arabia, the United Kingdom, Japan and Germany spend, for weapons, about a third of what China spends. Therefore China would be a much more plausible world military threat than Germany was in 1939. 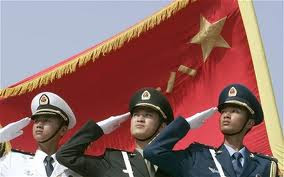 The Economist,  published an article on the growing Chinese military power:
“The Dragon’s new teeth”
http://www.economist.com/node/21552193?frsc=dg%7Ca
These are the article’s main points (but several experts warn not to exaggerate the Chinese threat): China’s already gaining influence in world affairs with peaceful means. Therefore, the Chinese have an interest in the stability of the world economic system. The mean per capita income is still very low: to raise it takes precedence over military ambitions. The Chinese military apparatus is modest, compared to the United States’, the vulnerable spots of which the Chinese could strike with thousands of ballistic and cruise missiles, nuclear and conventional submarines, radar and satellites capable to disrupt enemy communications and neutralize the threat of the United States’ aircraft carriers.

The People’s Liberation Army (PLA) with its 2,300,000 troops, is the largest in the world and it’s controlled by the Central Military Commission of the Communist Party of China.
Its chain of command, highly computerized, and its long term plans are not clear.
The communications between the Pentagon (the seat of the U.S.A. military ndt) and the PLA discuss questions related to security, monitoring and intelligence and sometimes they are closer than the communications between the two governments. In the near future China will have at its disposal thousands of unmanned combat aircraft, satellites and 60 stealthy submarine vessels undetectable by sonar.
Other sources reveal  more worrisome information about the future. Professor Phillip A. Karber of Georgetown University, an expert who worked for the U.S. Secretary of Defense, described a network of tunnels, (the “Great Underground Wall of China”), that would appear to spread for thousand of miles, with a railway designed to move ballistic nuclear missiles quickly so they could be launched from many unpredictable spots.
This data was inferred from Chinese documents and satellite images. The Chinese nuclear arsenal could be many times larger than what has been declared or estimated up to now. Karber’s work has been severely criticized because it’s said to be based on low quality translations and on cursory interpretations of the satellite imagery. Nevertheless, it seems that Chinese military sources have confirmed the construction of a km 3,000 (1,875 miles ndt) underground railroad network.
Compared to the relative transparency of the information released by Russian and American authorities, the Chinese reports are much more reticent.
It is arduous to form an informed opinion about complicated questions such as this. I have gathered other data from Chinese sources (also available online). Among these is a drawing rendition (which looks like science fiction) of a Chinese mega-carrier which would dwarf any American vessel. 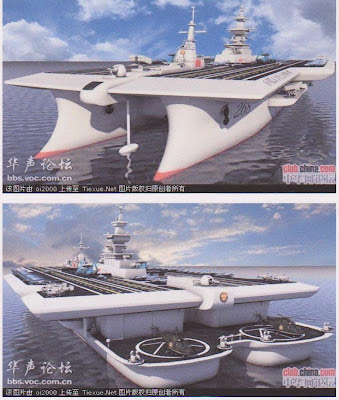 It is probably only a concept someone pulled out of a hat. (It almost certainly is: those installations in the bow, forward of the catapults are not viable). It doesn’t seem plausible to me. With today’s accurate missiles, I think the aircraft carrier, even one that big, doesn’t play an important role any longer. It did 79 years ago. The Japanese understood it very well, nevertheless they built the great 73,000 tons battleship Yamato, which didn’t serve any purpose and was sunk in April of 1945.
Maybe the Chinese, who think correctly today, will go ahead and build outdated weapons too? Let’s think about it and gather information. The important thing is to understand and spread the knowledge.

If you enjoyed this translation, please check out another interesting article by Dr. Vacca about falling from great heights. Thank you very much,
Leonardo Pavese