Showing posts with the label Partido Colorado
Show all

The Right Move of the Paraguayans. 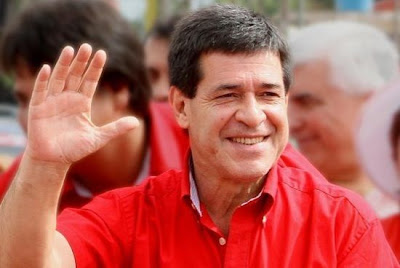 "A wise man's heart inclines him to the right, but a fool's heart to the left".  (Ecclesiastes 10:2).   I'm not sure the "Preacher", when he wrote that in the tenth century B.C., had the modern political concept of right and left in mind; but I'm glad that Paraguay (which I consider my other adoptive country), did not chose to go the way indicated by the late Venezuelan President Hugo Chávez.   The following article, by Maurizio Stefanini , was taken  from the Italian daily newspaper Il Foglio . Your comments, as always, will be greatly appreciated. Thanks, Leonardo Pavese    Horacio Cartes     THE PERSONALITY-BASED POLITICS OF CARTES.  Is it the answer to Hugo Chávez style caudillismo? (Translated from Italian by L. Pavese). The 56 years old Paraguayan citizen Horacio Cartes confessed that, in his entire life, he voted for the first time just last Sunday. To make up for it, he voted for himself and became president: a pre
Post a Comment
Read more
More posts