If it were lined up with the other aircraft of the 200 series that Dr. Castoldi designed for Macchi the C.203 would certainly look like it did not belong. Why was it given that designation? With this article Giovanni Massimello sheds some light on an almost unknown but very interesting airplane and on the apparently messy designation system applied by Aer.Macchi in the years that preceded, and during, World War II. I hope you will find it interesting.
Your comments will  be greatly appreciated.
Thank you,
L. Pavese

Aer.Macchi C.203: An intruder among the aircraft of the 200 series?

After the emersion of the Macchi C.204 from piles of yellowed sheets of paper, we just needed to find out some information about the model C.203 to be able to complete the series of Dr. Castoldi’s designs, which began with the Macchi C.200.
One could have expected that – under the designation C.203  – some evolution of the C.202 would pop up, maybe with a new fuselage redesigned to house a Mauser gun firing through the shaft of the Daimler Benz 601A engine, like in the Messerschmitt Bf109. This modification, notwithstanding the pressure of Benito Mussolini who wanted a “fighter-cannon” now, could not easily be made in the C.202, due to inescapable weight and balance problems. A new design would have been necessary, with new tooling and a new assembly line. All that was hard to accomplish in a short time, and therefore nothing was ever done. Perhaps, one could also have envisioned the C.203 as a preliminary project to replace the DB 601A of the C.202 with a more powerful engine.
Nothing of that kind.
The C.203 was actually a design of a twin-engine seaplane, destined never to leave the drawing board. 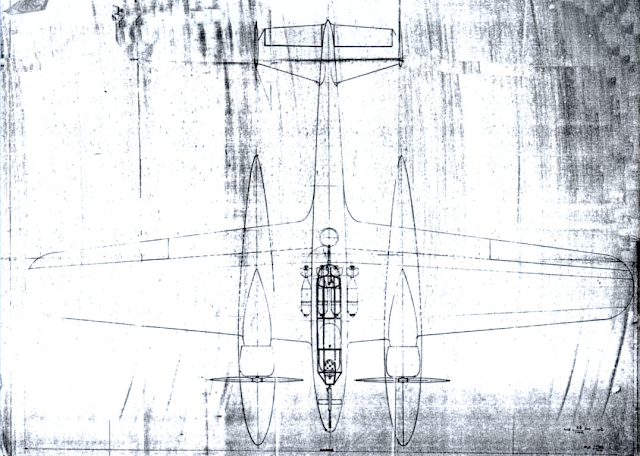 Aer.Macchi entered the C.203 project in the 1937 ministerial contest for a high-speed reconnaissance seaplane. The other competitors were the Caproni Ca.124 and Ca.410, the IMAM Ro.55, the FIAT-CMASA RS.14 and the CRDA Cant. Z.510. The winner of the competition was the RS.14, and the design of Dr. Stiavelli went on to series production.
Dr. Castoldi of Aer.Macchi, who undoubtedly knew seaplanes, had designed a slender twin with pontoons, with a twin tail and armed with three machine-guns: one fixed in the nose and two swiveling ones, one dorsal and one ventral. The section of the fuselage of the seaplane was very thin, with seating in tandem.

The wingspan of the C.203 was m 20,9 (ft 68 ½) and the total length was m 14,34 (ft 47). The engines were very likely the omnipresent FIAT A.74. For comparison, the RS.14, which was very similar and used the same engines, had a wingspan of m 19.54 (ft 64.10) and was 14.10-meter long (ft 46.2). The most obvious difference was the lack of a windowed bow in the C.203; a non-insignificant feature in an aircraft designed for “fast reconnaissance.”
A final curiosity concerns the sequence of the Aer.Macchi aircraft designations. The C.200 dates back to the 1936 contest for a new fighter; the C.201 to the competition of 1938. The C.202 is a 1939 project (when the Italian Ministero dell’Aeronautica and Daimler Benz stipulated the agreement to produce the DB 601A engine under license in Italy). The model C.204 is dated March 1940, as it can be ascertained from the drawings. The C.205 can be placed in the second half of 1941; and finally, the C.206 and C.207 are from the 1943/44 period. So why is the C.203 project dated 1937 then? At this point, the excellent memory of Gianni Cattaneo came to our aid. Gianni reminded us of the somewhat messy Aer.Macchi designation codes management. In fact, in the archive of the company there is an early sketch designated C.200, dating back to the end of 1935, accompanied by a contemporary sketch, designated C.201, both powered by the FIAT A.80 radial engine. Another proposal was made in February 1936, with the designation C.202, which had nothing to do with Macchi C.202 as we know it. It was a design, which was not pursued further, of a monoplane with the cockpit very far forward, as in the Breda Ba.65. The same designation C.202 was then used in 1939, much more successfully, for the German in-line engine development of the “true” C.200 which we all know. Therefore, in 1937 the first available model designation for Dr. Castoldi’s seaplane was C.203, of which today only three faded drawings remain.

This is a translation of an article that appeared originally on the Italian magazine Ali Antiche, which is a publication of the GAVS Gruppo Amici Velivoli Storici (Friends of Historical Aircraft Group), an Italian organization dedicated to the preservation of historically significant aircraft.
It was printed here with their permission.