One Hand Always Points to the Truth 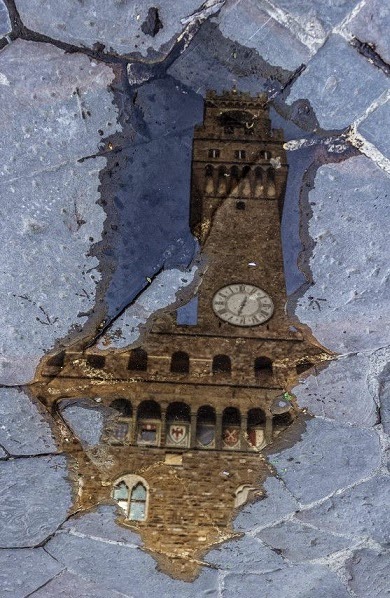 The Clock of Palazzo Vecchio
and the Florentine Detective.
By Roberto Vacca.

To everyone he was VP, not as in Vice President, but as in Vice Padrino. He was very self-confident. He was feared from Vegas to Miami, from Como to Capo Passero. Everyone obeyed him. He said:
“Special agent Patrick O’Cuillenain followed me all the way here to Italy. That Irish son-of-a-bitch is going around saying he’s here just as a tourist. But he’s really sticking his nose where he’s not supposed to. I am gonna waste him myself.”
His cousin objected:
“VP, no. Do not expose yourself. We can send one of the boys.”
“No, I’m gonna do it myself. This is personal.”
Agent O’Cuillenain was pleased with his escort. Jack Ryan was an old friend. He was also Irish and spoke Italian well. O’Cuillenain had also hit it off with the Italian Florentine Carabinier Carlo Guarducci. He had sized the Italian up right away as smart, confident and reliable.
The three of them had eaten in a very good restaurant in Trastevere, then Ryan and Guarducci had taken O’Cuillenain to Saint Peter’s Square.
The Irish detective’s eyes panned over the vast colonnade. He was looking for the spot from which all the pillars appeared to be lined up, as if there was only one of them. He froze. VP was standing in front of the colonnade, smiling at him from thirty feet away.
The huge hand of the gangster was wrapped around a large .45 caliber semi-automatic gun. The grips of prized wood had been carved especially for him. VP fired two shots in rapid sequence. The 154 grains of each slug pierced O’Cuillenain’s chest, killing him on the spot. 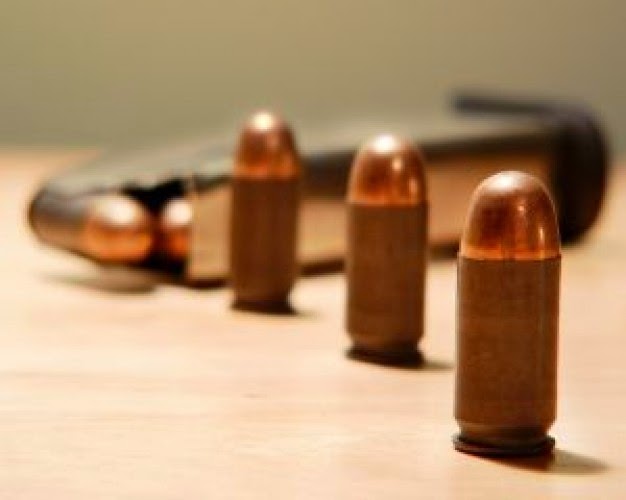 Ryan and Guarducci stared at VP’s face for a moment. They were about to return fire, but a large grey SUV drove up at high speed and stopped in front of them, blocking their view. Then the car bolted, taking away VP who had jumped aboard.
Ryan and Guarducci shot at the car, but it quickly disappeared in the direction of the Aurelia. Then they saw that the Irish agent was dead. Guarducci called headquarters, relayed what had just happened and reported the SUV’s license plate number.
While they were running to their Alfa Romeo service car, Guarducci asked:
“Did you recognize him?”
“Sure!” answered Ryan, “VP is very well known. Patrick had chased him all the way here. I have his picture. Circulate it, and let’s block airports, train stations and border crossings.”
Guarducci took the American’s cell-phone and transmitted the photograph. Then he turned on the siren and, with a screech of tires, he and Ryan took off in the Alfa Romeo.
“Let’s go to Fiumicino!. We’ve got to catch him!”
“This time he’s got no defense. We caught him red-handed, with the smoking gun. He’s going to be extradited to Texas, where they’ve still got capital punishment. With our testimony, he’s finished. Fix this time in your memory: 3:50 PM. What do you say in Italy? 15:50, on June 21.
But VP did not show up at any airport or railroad station. He was arrested several hours later in a nice Florence hotel in Santa Maria Novella Square. He was in the company of his famous attorney.
Ryan got to the Florence prison first and gave his testimony. Guarducci’s train was late. When the Carabinier arrived at the Sollicciano detention center, Ryan ran towards him before he got in.
“Carlo! This is not possible! VP’s lawyer’s here. He testified that yesterday afternoon VP was in Florence with him. He even has a picture of the two of them, in front of Palazzo Vecchio. The clock is visible, and it’s marking the exact time VP shot O’Cuillenain, at three fifty. There’s even a lady going by with yesterday’s paper in her hands. What’s going on? Did they find a double of VP, here in Italy?” Ryan was overcome with grief.
Guarducci took the large photograph, and looked at it carefully. Then he smiled.
“These gangsters of yours are really dumb! How did they think they could get away with it here in Florence? Don’t you know the story?
“What story? It seems to me VP’s got an ironclad alibi.”
Guarducci shook his head.
“Not at all! Read your Michelin guide! The clock in this picture is marking ten in the morning! It’s one of those rare ancient clocks with only one hand: the long one; and it’s marking the hours. To figure out the minutes you have to estimate tehm, based on where the hand is, between one hour and the next.
“The short hand is just a counterweight, and it stays always opposite the long one, on the same diameter. Every foreigner believes the clock is broken. Not so. In this case the short hand is indicating four, but it doesn’t count.
“That idiot VP took his picture yesterday morning at 10, and he was sure he was going to fool us; but he didn’t take into account that there could be a Florentine in the Italian police.”
Ryan smiled too, he was relieved.
“Good. He’s not getting away now. But what kind of clocks do you make here? Aren’t you embarrassed?”
“Maybe we should change it; but change here happens at a very slow pace. However,  the clock was built in the 1600’s by a German.” 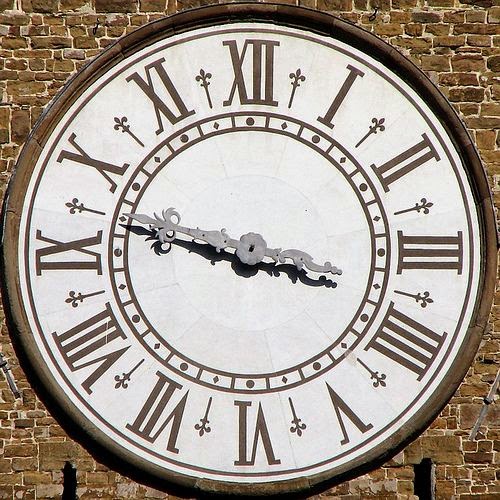 This short story was written for the June 2014 issue of the Italian magazine L'Orologio.
Roberto Vacca by training is an engineer and a computer scientist. He has taught at universities in Rome and Milan, but has achieved fame in Italy and abroad as a science writer and as a fiction author. Probably his most famous novel is "Death of Megalopolis" (1974), and it can be found (with most of his other very interesting and very readable books), both in Italian and in English, on Dr. Vacca's site: printandread.com.
On this blog there are several other articles by Dr. Vacca, which I translated into English. This is about total war. This one is about the mechanics of free falling, and this is about writing and blogging, basically. Check them out, I'm sure you will find them interesting.
The picture of the clock tower, reflecting in the puddle, is by Miguel Duarte.
I'd like to thank J.J.P. for reviewing the English text, and to thank you in advance for your comments.