Good confessors tell the sinners, who are determined to change, that a long period of abstinence is equivalent to a second virginity. Maybe that’s the reason why the “canonization,” while he was still living, of Nelson Mandela made everybody forget his true origins. But that’s why good journalists exist.
Nelson Mandela’s real name was Rolihlahla Dalibhunga, and he was a prince of the cadet branch of the xhosa speaking line of Thembus. He was born on July 18, 1918 on the shore of the river Mbashe, in the district of Umtata, in Tembuland, capital of Transkei (the former Bantustan), in the south-eastern Republic of South Africa, which has been  independent since 1979. The family moved to Qunu, where many still think he was born, when his father lost his succession rights to the throne and fell out of favor with the colonial authorities. In elementary school, a methodist pastor, who was fascinated by the hero of the battle of Trafalgar and could not pronounce the name “Rolihlahla,” rechristened him Nelson. For the record, Rolihlahla means troublemaker. The last name Mandela was the first name of a son of one of Nelson’s ancestors, King Ngubengcuka, that had been passed on as a surname.
In 1940, when he was twenty-two years old, he and his cousin Justice rebelled against the marriage arranged by the Thembu chief Jongintaba Dalindyebo, who had raised him like a son. But Nelson eventually would have three wives, (his father had four, and he was a son of the third one), the most famous one of whom was Winnie Madikizela, who was very very much involved with the 1980’s and 1990’s bloodbaths of Soweto and vicinities. Winnie was such an extremist that even Nelson one day would eventually opt for a second virginity in democratic clothes and repudiate her.
Nelson joined the ANC in 1942, and befriended Yossel Mashel “Joe” Slovo, the future leader of the South African Communist Party. In 1952, Mandela became the president of the Transvaal chapter of the organization, and in 1961 he created Umkhonto we Sizwe (“The Lance of the Nation”), the armed branch of the ANC. People in the streets began to get hurt. Blacks who did not feel represented by the ANC or by the Communist Party ended up with a burning tire around their necks. 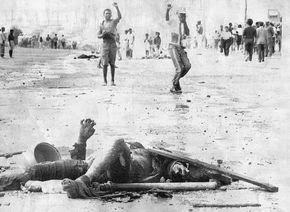 The racial problem in South Africa had been huge at least since 1948, the year in which the Nasionale Party (the Afrikaan nationalist party) had impose the apartheid regime; but it was clear that the communist character of the ANC was not the solution but part of the problem. It was a big problem, for example, for the Inkatha Freedom Party, led by the Zulu King Mangosuthu Buthelezi, who was very black and also a sworn enemy of communism and of the ANC. On the other hand, Comrade Slovo was of white Lithuanian origin.
On May 5, 1962, Nelson Mandela was arrested in Howick, Natal, and sentenced to five years in jail for minor crimes.  In his wake he had already left a series of attacks that, from the 19th to the 21st of March 1960, had killed 86 people and wounded 424. All the attacks had been attributed to the ANC and to its separatist wing, the Pan African Congress. Then, on July 11, 1963, in Rivonia, near Johannesburg, the police discovered the clandestine headquarters of the Lance of the Nation. Mandela was under pressure again, and finally he was convicted of conspiracy. One hundred and seventy-three witnesses were heard at the trial, but it was Nelson Mandela himself who openly admitted that his organization was pursuing its goals through violent means. Moreover, he confessed to have personally planned sabotages and to have set up military training camps abroad, including one in Algeria that he had personally supervised. After all, he had also theorized the armed class struggle in several manuals (such as one entitled “How To Be A Good Communist”),  in political writings about “dialectic materialism,” that emerged during the Rivonia trial, and in the pamphlet entitled “Operation Mayibuye” (“Return”), where he cited the precedent of the communist guerrilla war in Cuba, which had won and survived. In one of the texts seized by the police and presented in the courtroom, Mandela described in detail the path of honor to be followed in the name of Marxism-Leninism, for which it was necessary to procure, among other things: 210,000 hand grenades, 48,000 of the infamous anti-personnel mines and 1500 detonators for as many bombs.
On August 23, 1985, in an unsigned interview published by the Italian daily La Stampa, Mandela laid it all out: “The white man must be totally defeated and wiped off the face of the earth, before the communist world can be realized.” Mandela spent 26 and a half years in jail, from June 1964 to February 11, 1990. Later, as a free man, he rose to the presidency of the good old ANC, and on March 10, 1994, he became the democratic and acclaimed president of the new post-racial South Africa. One of his ministers was the ever-present white and red Joe Slovo.
Inspired by Karl Marx and by the priests of the Liberation Theology, Mandela has been compared to the Mahatma Gandhi (who began his career in South Africa as well, and was also an admirer of the philosopher from Treviri). In his land he was venerated as “Mandiba,” an honorary title of the elder members of his clan, that became a world renowned nickname. In 1993 he was awarded the Nobel Peace Prize, notwithstanding his past as a communist guerrilla fighter, his siding with Iraqi dictator Saddam Hussein, his friendship with Yasser Arafat (an anti-semite, a terrorist and also a winner of the Nobel Peace Prize in 1994), Fidel Castro, and Muammar Gaddafi; and even if, in an August 23, 1985 John Lofton interview in The Washington Post, he had declared: “there is no alternative to violent revolution; there is no space for peaceful confrontation.” Apartheid was disgusting; racial segregation was too; racism even worse. But could that be that Nelson Mandela just happened to be black?
The article appeared originally on the Italian daily l'intraprendente, and was translated and published here with their permission. Marco Respinti is an Italian author and the director of the Russell Kirk Center. Your comments to the article will be greatly appreciated. Thank you, L. Pavese.