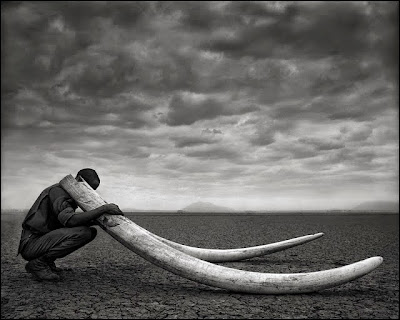 THE AFRICAN JIHAD RELIES ON POACHING
by Anna Bono
(Translated by Leonardo Pavese).

In Africa an elephant dies every fifteen minutes. It is a slaughter without precedent. Many of the elephants killed every day are shot down in Kenya’s national parks and natural reserves. Moreover, most of the elephant tusks poached in the other East-African countries flow to the Kenyan port of Mombasa to be loaded clandestinely on ships headed to the Far East. As a result, Kenya is included in the so-called “Gang of Eight,” which comprises the countries deemed to be the main culprits of the extermination: Tanzania, Uganda and Kenya as suppliers of tusks; China and Thailand as buyers (it is estimated that China alone imports 70% of the illegally traded ivory); Malaysia, Vietnam and the Philippines because they are among the principal smuggling countries.
Kenya already pays a dear price for not being able and determined to fight the poaching of the elephants. The price is paid in the form of a reduction of the income deriving from tourism, which is a fundamental part of the economy of the country: about 80% of the revenue comes from the hundreds of thousands of visitors from all over the world who travel to Kenya every year, attracted by the wildlife.
“If we eliminated wildlife,” declared Mr. Paul Mbugua of the Kenya Wildlife Service, during a March 2013 meeting on the ivory traffic that took place in Thailand, “ we might as well forget tourism to our country.” His fears seem to be confirmed by the number of visitors to Tsavo East, one the most popular national parks, that decreased by more than a quarter in 2012 as compared to 2011,  dropping from 369,000 to 271,373. But, on September 21, Kenya also payed for its inability to counteract poaching with a great tribute in blood. It is well known that, on that day, a commando of al Shabaab - the fundamentalist Muslim group linked to al Qaeda - attacked the Westgate shopping mall in the capital Nairobi and barricaded themselves in it, resisting the siege of the police for four days, during which the terrorists killed sixty-seven people (according to the most recent account by the Kenyan Red Cross). Thirty-nine people are still missing.

As much as 40% of the money with which al Shabaab finances its terrorist activities comes from the smuggling of ivory and rhinoceros’ horns. It was revealed by a 2011 investigation carried out by Maisha Consulting (an organization of experts in natural conservation) and by the Elephant Action league (a group that was created to oppose the exploitation of elephants). At the time, al Shabaab grossed from US$ 200,000 to US$ 600,000 a month from the sale of ivory, for which they paid the poachers about US$ 100 for each pair of tusks. There are no more recent data, but it looks like the areas of operation of al Shabaab in Kenya are still, to this day, the South Kitui Game Reserve and the Kora National Reserve in central-eastern Kenya. Not only al Shabaab but many other African armed groups get what they need for sustenance and for procuring weapons and ammunition from trafficking in ivory and other animal parts. Some groups, like al Shabaab, are engaged in the smuggling of the products; other groups also do their own poaching.
The LRA (the Lord’s Resistance Army) and the Janjaweed are among the latter. The LRA was born in Uganda in 1987 as a rebel anti-government movement, and it has been active since 2005 in Southern Sudan, the Central African Republic, and the Democratic Republic of Congo. The evidence that the group is financed through poaching (selling tusks as well as trading ivory for arms and ammunition) by explicit order of its leader Joseph Kony is contained in a report by the association Enough Project. And it is not hard to believe, considering that the LRA is known as one of the most cruel African armed groups, that is responsible for massacres, mutilations, rape, kidnapping, and forced enrollment of child-soldiers --- acts for which, in 2005, Joseph Kony was indicted of war crimes and crimes against humanity by the International Criminal Court. The Wsf and other organizations of conservationists have revealed that the Janjaweed (“the horse-mounted devils”) -- the terrifying militias of Arab origin who the government of Sudan unleashed against the tribes of the Darfur region-- participate in the illegal traffic of ivory.


They were responsible for the slaughter of elephants carried out in the early months of 2012 in Cameroon. After sneaking repeatedly into the country, the Janjaweed killed an estimated 300 to 500 pachyderms. Before that, acting with other militias present in the region, they had slaughtered many animals in Chad and in the Central African Republic.


“If you buy ivory, you kill people,” is the Elephant Action League’s slogan. Kenyans just found that out at their own expense.