Green of Fear at 0 g.
By Roberto Dal Bosco
(Translated from Italian by L. Pavese)

There is a great motion picture in the theaters: Gravity. Just for once, at the top of the box office there is a work of absolute great quality. Gravity is one of the most emotionally stirring movies of recent times. The story tells of the feats of two astronauts who, shipwrecked in orbital space, try in some way to get back to Earth. We should not reveal anything more, to avoid spoiling a movie that deserves to be seen. Although this is a motion picture with a budget of US$ 100 million, the movie --- which is a sort of cosmic chamber play --- features only two actors, George Clooney (very well cast in the role of the gung-ho self sacrificing American) and Sandra Bullock, who, these days, is a little marred by plastic surgery and too much physical exercise but is still able to move the audience as only great actresses can do. The director is Alfonso Cuarón, who is a leading figure in the new movement of Mexican directors that flooded the United States and the world with their work of refined workmanship. 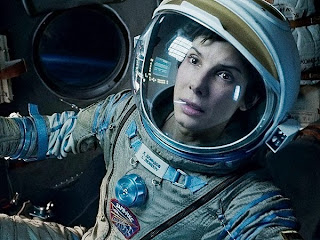 In his career Cuarón directed several successful projects, such as an adaptation of Dickens’ Great Expectations, an animated short film featuring anti-globalization activist Naomi Klein which illustrated her book, The Shock Doctrine, and a chapter of the very fortunate Harry Potter’s saga. But Cuarón is most pleasantly remembered for Children of Men, a motion picture adaptation of the dystopian novel by British aristocratic author and member of the House of Lords, Phyllis D. James, which tells of a future world in which women have entirely lost their ability to conceive children, condemning humanity to a sterile and gloomy despair. Although Children of Men was a wonderful piece of cinematography that demonstrated Cuarón’s superb skill, Gravity is perhaps his best movie. An intimist but fast-paced plot is complemented by a gamut of special effects which have practically no equal in any movie that has been made so far - including bigger budget colossal productions. The rendering of life in space among artificial satellites, space stations, shuttles and, above all, the spectacle of Earth viewed in its minute details are a true visual miracle. The mastering of computer graphic techniques and compositing (that is, the matching of real photographic material to digitally created environments and objects) allows the director to accomplish out-of-scale virtuosities, such as constantly varying shots that never change framing and subjective points of view that are awesome to say the least. To call Gravity a movie-making masterpiece would not be too far from the truth.
Nevertheless, to remain totally indifferent to the underlying message would be impossible. It is a message that concerns not only Christians, Catholics, but also humanity as a whole. In fact, it is very unlikely that one could leave the movie theater with the idea that space still had a role to play in human life. Actually, the impression is that space is an environment of horror, destruction and death. That is not only an emotional inference; it is the planned intellectual outcome of a movie whose tagline is: “life in space is impossible.” That sentence is repeated at the beginning of the picture, along with other data that are supposed to prove that space is uninhabitable.
The female protagonist, who has problems “keeping her lunch down at zero g,” after having painfully reached the halfway point of the movie, even lets slip a very telling statement: “I hate space.” It must be said that if there were a prize for astronautical bad luck she would win it hands down, but coming from an astronaut her statement amounts to outright condemnation. And the movie can’t help but follow along those lines.

The problem is that behind the denigration of the various space programs there always lurked something else. Those who would like to anchor humankind to planet Earth - and they are many - have been working since the beginning to undermine the achievements of the space era. In the frame of not even two decades, we went from the enthusiasm for the feats of Yuri Gagarin and the Apollo missions to a mentality that envisions Earth as the only suitable place for human proliferation, and that perceives any attempt to move beyond as hubris deserving the maximum divine punishment - which is, in a nutshell, the theme of Gravity.
This way of thinking is by now very widespread, and it has degenerated into a kind of pseudo-religion. It is the Gaia Hypothesis. According to British scientist James Lovelock, who theorized it first, Gaia is the holistic entity that is one with the Earth, whose cult would be etymologically correct to define as pagan. Man is nothing but a beast among beasts: just another component of Gaia - and actually a dangerous, turbulent element, potentially carcinogenic for the whole system of Mother Earth. (A ghostly composite advertising image of Earth, made up of smaller frames à la National Geographic magazine, actually appears at the end of Gravity.)  It would be futile for Man to look for his destiny outside the maternal globe, so natural and beautiful. The cult of Gaia constitutes part of the ideological armamentary necessary for the eco-fascist sealing-up of the planet. Man must remain in his Mother’s womb forever - or potentially even be aborted. In Gravity, this closure is represented materially by the Kessler effect, which is the true deuteragonist of the film; that is, a chain reaction of cosmic debris that renders the orbital environment so “polluted” to eliminate any chance of space exploration for many generations to come.

As  it will be obvious to the reader, all theories about “the limits of economic development,” and the exhaustion of natural resources - which are so dear to the Club of Rome as well as to environmentalist movements and even to freak-political parties like the Italian M5S of comedian Beppe Grillo - remain moot before the possibility of space colonization. The zero-population growth programs and the lie of the demographic bomb and its apocalyptic overpopulation prospects suddenly become worthless currency for human beings convinced that, one day, they will be able to live on Mars, on Jupiter’s moon Europa, or on the space colonies in Earth’s orbit, envisioned by Gerald K. O’Neill - which were represented in cinemas by 2001: A Space Odyssey and by the more recent Elysium, which is also, in its own way, an anti-space exploration picture.
The enthusiasm that, in the 1960’s, greeted the beginning of the space adventure and the idea of a new frontier for humankind was very different, and was shared even by important Catholic thinkers like Italian Giorgio La Pira, the late mayor of Florence (who is about to be beatified). On April 10, 1961, the mayor greeted the conventioneers of the World Space Scientists Convention in Florence with the following words:
“With your message, in a sense, you proclaim the opening of all the gates and all the ways to the visible Heavens, and the measurability of the celestial space....Your scientific message is an invitation to the peoples of the world - like Abraham’s biblical invitation! - to raise their eyes to the skies and to undertake that great space adventure that has already inaugurated a new era, which will define more and more the structure and the aspect of the history and the civilization of the future. Your scientific message changes radically, and at every level, the history of the world; from the elemental basis of technology and economics, to the highest levels of culture, politics and spirituality. It opens hopeful perspectives of happiness on the destiny of the human family of such amplitude that inscribe, unpredictably, in the actual history of the peoples of the world the most famous prophecies  of peace and hope that were left to the world by the prophets of Israel....And it reveals, even more, the infinite value of the human person - the microcosm! - who is made more and more capable of dominating the universe.
“Finally, your message redefines the historical weight of the nations, which will be as great as their ability to measure the skies and to venture in the oceans of celestial space....Your scientific message, examined in the historical context of Florence, acquires a new meaning...it becomes a message of beauty, and it introduces the human person, peoples and civilization, in the high orbit of religious and artistic contemplation....”
Fifty-two years later, it seems impossible that a politician could deliver such a speech.

But not everything is lost. Groups of private investors - for example the Google’s duo and even movie director James Cameron - are directing their attention towards space. The most relevant example is Elon Musk (the creator of PayPal and founder of Tesla Motors, the maker of electric cars). In 2002, Musk created SpaceX, a private company that builds rockets and launches payloads into orbit for the armed forces, NASA and private clients and is incredibly generating profits. Notwithstanding the fact that the eco-fascist anti-space exploration propaganda is now being nominated for the Oscar, the hope of human space colonization is not yet dead.

Roberto Dal Bosco is an audio-visual artist and author based in Vicenza, Italy. I have translated in English his book Contro il Buddismo (Against Buddhism), which was quite successful in Italy, and we hope to make it available very soon.
The article you just read appeared on the Italian on-line magazine La Nuova Bussola Quotidiana . The translation was posted here with permission. (Many thanks to J.J.P. for reviewing the English text).
Your comments will be greatly appreciated. Thanks,