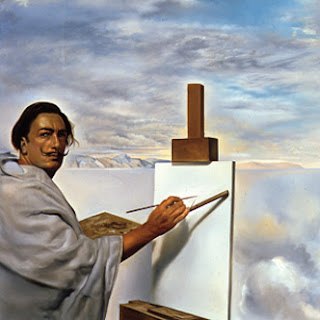 
I was in St. Petersburg, Florida (U.S.A.) for a convention, and I had the opportunity to visit the new futuristic venue of the Dalí Museum, designed by Yann Weymouth. Actually, the fantastic shape of the building probably functions to protect the museum from the frequent hurricanes, since it is built dangerously close to the ocean.

Other than the artist’s collection in his house-turned-museum in Figueres, Catalonia, St. Petersburg’s is the largest collection of works by Salvador Dalí in the world - 96 oil paintings, sculptures and various other objects.

The collection, which belonged to plastics magnate and Dalí’s friend, Albert Reynolds Morse (1914-2000), arrived in Florida in 1982 when the billionaire, hounded by tax collectors, was forced to dispose of it. The new museum was inaugurated in 2011.
The great merit of the St. Petersburg’s museum consists in presenting the entire arc of the professional life of Salvador Dalí. Although at the core of the exhibit there is a robust collection of Dalí’s most famous phase, Surrealism, the sections dedicated to the youth and to the last ten years of the life of the Spanish painter are particularly rich. Although today Dalí is mostly known for his bizarre behavior and his desire to amaze at any cost, his early works show Dalí’s great mastering of different techniques; but the works of his maturity and his old age, after the break with Surrealism, are characterized by the rediscovery of religion.

Dalí had experienced in his family the cultural conflict between the Catholics and the anti-clerical forces which would eventually lead to the tragedy of the Spanish Civil War: his father was an atheist (probably a Mason) who was very hostile to the Church, but his mother was a very devout Catholic. The tension in his family predisposed Salvador Dalí to espouse the violent anti-clericalism of the Surrealists, a view he shared, and was also stoked by his relationship with Gala Djakonova (1894-1982), who was a Russian model and the wife of the poet Paul Éluard (1895-1952). After divorcing Éluard, Gala married Salvador Dalí, in a civil ceremony, in 1932.

Between the years 1949 and 1950 Dalí began his tormented, and never really completed trek to the rediscovery of Catholicism. His old family-generated issues (which also explain his fascination with Sigmund Freud, whom the artist would travel to visit, in London, in 1938), created the persona almost everyone knows: a histrionic character, who was enamored only of himself, and whose exhibitionist attitudes were difficult to bear even for his friends and would eventually even  turn out to be bad for his health. Therefore, it is not surprising if many consider Dalí’s return to Catholicism just the last trick of someone who just wanted to shock and amaze all who knew him as a fierce anti-clerical. Whatever the case, he did manage to cause a stir: when in 1952 he decided to sell his painting of the previous year, “The Christ of Saint John of the Cross,” to the Kelvingrove Museum of Glasgow, Scotland, Arts students and politically correct intellectuals organized a march to protest the purchase (which nevertheless was eventually finalized) of such a scandalous, Catholic and retrograde painting by a progressive museum. 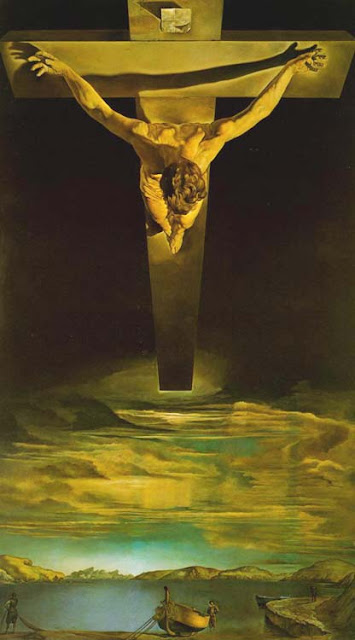 But it is exactly the pictorial itinerary shown by the St. Petersburg’s museum that demonstrates that Dali’s desire was not just to stun and scandalize, although that element is never totally absent in his work. In 1949, Dalí was received in Rome by the venerable Pope Pius XII, who was interested in modern art and had very kind words for “The Virgin of Port Lligat,” the very first “Catholic” painting of the Catalan artist, although still marked by surrealist influences.
Dalí always stated that  his return to religion was by the way of science, and in that sense his Catholicism, during his late years, was influenced by scientist and theologian Pierre Teilhard de Chardin (whose orthodoxy is certainly dubious). Science, according to Dalí, with the discovery of DNA for example, made it impossible for him to avoid the conclusion that a God who created an universe so complex and orderly must exist. Nevertheless, during a famous conference Dalí stated: “I believe in God, but I have no faith. Science and mathematics tell me that God must exist, but I don’t believe it.”
So, beyond his ever-present flair for the paradox, Dalí meant to say that he was rationally convinced of the existence of God and even - as he stated in another occasion - of the truth of Catholicism, but he could not “feel” faith. Nevertheless, he would later impose on a reluctant Gala, whose husband had died, a Catholic religious wedding in 1958.  He died in 1989 comforted by the sacraments of the Church.
The St. Petersburg’s collection includes two large canvases. One is the 1958 “The Discovery of America, by Christopher Columbus,” which is a celebration of Catholic Spain and of the epic deeds of Columbus as a triumph of faith. The second painting is “The Ecumenical Council,” which perhaps would be interesting to revisit in this year of faith, during which Catholics celebrate the fiftieth anniversary of the Second Vatican Council. The canvas was painted in 1960, after the calling of the Council by Saint John XXIII. 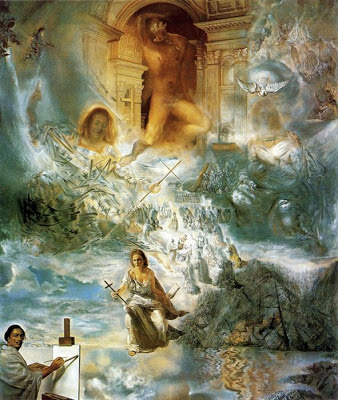 This enormous picture has a strong symbolic character. In the lower left corner, Dalí represented himself as Diego Velázquez in front of a completely blank canvas, that probably represents a totally new phase of Dalí’s life. Dalí also wrote that it couldn’t have been an accident that the artists he most admired, Velázquez, Vermeer and the architect Antonio Gaudí, had also been Catholic.
At the top of the painting Dalí’s wife Gala appears as Saint Helen (248-329), the mother of Roman Emperor Constantine (274-337) who is a much venerated saint in Catalonia. In the upper right there are: The Son, the Logos, whose body is transforming in subatomic particles (an allusion to Dali’s thoughts about the relation between faith and modern science); the figure of the Father, which is an obvious tribute to Michelangelo, and the Holy Spirit. In the center, the coronation of the blessed Pope John XXIII dissolves into a dream-like vision of the future Council.

Everything may appear strange in the works of Dalí and The Ecumenic Council is no exception. Dalí’s Catholicism is also peculiar, and today very few people would take as seriously as he did Teilhard de Chardin’s acritical enthusiasm for modern science. Nevertheless, this painting and, more generally,  the final decades of Dalí’s life prove (if it were necessary) that a meeting between the Church and modern art, although at the risk of possible misunderstandings, is certainly possible.


Massimo Introvigne is an Italian sociologist and the author of several books about the sociology of religion. In 2012 he was appointed chairman of the newly instituted Observatory of Religious Liberty of the Italian Ministry of Foreign Affairs, to investigate the issues related to religious freedom in the world.
The article you just read appeared originally on the Italian daily La Nuova Bussola Quotidiana, and it was translated and published here with their permission.
Your comments will be greatly appreciated. Thank you,
Leonardo Pavese