By Antonio Martino (Translated and edited by L. Pavese)

All the countries of the Eurozone, albeit in different measure, have entered the deepest economic depression in their  history. Unemployment is rapidly increasing; the rate of growth, for many of them, has been negative for too many months; all the indexes suggest that the consequences of the simultaneous adoption of recessive policies are compounding. The cause was pointed out by J.M. Keynes in 1936:


“The ideas of economists and political philosophers, the right ones as well as the wrong ones, are much more powerful than it is commonly thought. In reality, the world is governed by few other factors besides those. Political philosophers and economists, who believe to be totally free from any intellectual influence, are usually the slaves of some defunct economist.” (The translation from Italian is mine. L. Pavese).
Let’s see. Generally, the Germans, and in particular Chancellor Merkel, are convinced that the countries that adopted the Euro are tied by a solidarity bond which would force the “virtuous nations” to take on the debt of the profligate ones. The widespread belief is that, if a country of the Eurozone can’t honor its debt, it is the duty of the others to help prevent it from defaulting. This thesis is strengthened by the belief that the default of one country would have a domino effect on all the others; but these theses are not only baseless, they are also totally contrary to the spirit and the letter of the Maastricht Treaties.


In fact, the Treaties, after having established that the objective of the ECB (European Central Bank) should be monetary stability, coherently prohibit the ECB from monetizing the debt of the Member States by buying their public debt. These admirable dispositions are unequivocal: the stability of prices and currency are the responsibility of the ECB, but the decisions in matters of taxes and budgets belong exclusively to the autonomous national states. That is, there should be an European monetary policies distinct from a national budgetary policy. Then what sense does the so-called "Fiscal Compact" make? How can the grotesque attempt to strip the national states of their budgetary sovereignty be justified? Nothing in the Treaties authorizes that, and it is contrary to logic and common sense.

The fifty United States of America use the same currency (the U.S. Dollar)  but each one of them is perfectly free to adopt the tax and budgetary policies that they see fit. They implement them and they bear the consequences. In Texas, for example, there’s no state income tax; the state is growing at a fast clip; the workforce is increasing; the state finances are florid. On the other hand, California is burdened by a very expensive welfare state, exaggerated taxes, high unemployment and a busted budget. Nobody ever suggested that Texans should pay the debt of Californians; or that the U.S. federal government (which has existed for more than two centuries, unlike the E.U.) should bail out California, or that the Federal reserve should monetize California’s debt.
The policies of standardization, harmonization and unification pursued in Europe are unjustified, ridiculous and harmful.

In conclusion, the Euro-bigots who want different people to wear the same size clothes are causing hundreds of millions of Europeans to fall into the abyss of economic depression and they deserve to be treated like what they are: pompous and ignorant charlatans who want to impose their fantasies on the citizens of free countries. The sooner we understand that that is totally baseless, grotesque and that is has nothing to do with the European ideal, the better will be for everybody.

Pope Benedict XV was convinced that the divine origin of the Catholic Church was demonstrated by the fact that the clergy had not managed to destroy it, yet. The survival of the European ideal to the crookedness of the Eurosaurus maybe demonstrates its validity. Let’s be careful though, Jesus promised the Church immortality, but nobody promised it to the E.U. 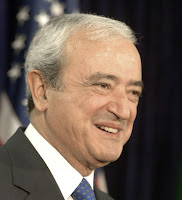 Antonio Martino is the former Italian Minister of Foreign Affairs, and former Minister of Defense. He is now a professor of Economics, currently on parliamentary leave.
The article was taken from his personal blog (in Italian), and was translated and published here with his permission.
You comments will be greatly appreciated. Thank you.