The Right Move of the Paraguayans.

April 25, 2013
"A wise man's heart inclines him to the right, but a fool's heart to the left".
(Ecclesiastes 10:2).
I'm not sure the "Preacher", when he wrote that in the tenth century B.C., had the modern political concept of right and left in mind; but I'm glad that Paraguay (which I consider my other adoptive country), did not chose to go the way indicated by the late Venezuelan President Hugo Chávez.
The following article, by Maurizio Stefanini, was taken  from the Italian daily newspaper Il Foglio.
Your comments, as always, will be greatly appreciated.
Thanks,
Leonardo Pavese


THE PERSONALITY-BASED POLITICS OF CARTES. Is it the answer to Hugo Chávez style caudillismo? (Translated from Italian by L. Pavese).

The 56 years old Paraguayan citizen Horacio Cartes confessed that, in his entire life, he voted for the first time just last Sunday. To make up for it, he voted for himself and became president: a president who, after the brief interval of Federico Franco, represents a sharp break with left wing Bishop Fernando Lugo, who was elected in 2008 and deposed last year. In fact, Cartes not only comes from the right, but he’s also a multimillionaire. He’s the owner of the Banca Amambay and of a conglomerate of twenty-five companies that employ more than 3500 people; companies that a large number of Cartes’s compatriots must deal with, whether they like it or not. 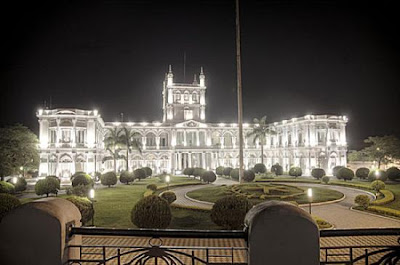 Many people joke about the fact that many Paraguayans, who ruined their health abusing the cigarettes that Cartes produces or the booze that comes out of his distilleries, or the red meat from his ranches, could later detox in one of the famous clinics that also belong to Cartes’s empire.  Moreover, besides smoking, drinking, eating Cartes’s products, curing themselves in his hospitals and depositing their money in Cartes’s banks,  many Paraguayans wear clothes signed by Cartes, travel with his means of transportation and shop in his supermarkets.


In 2001 Cartes became the president of the Libertad Football Club, which is now the third Paraguayan soccer team after Olimpia and Cerro Porteño. Libertad had dropped into the B series in 1998, but with Cartes at the helm, the team won seven league championships and reached the semi-final game of the Copa Libertadores.


Last but not least, great merit was given to Cartes, as the manager of the Asociación Paraguaya de Fútbol, for the good results achieved by the national team in the 2010 World Cup tournament, in which Paraguay contributed to the elimination of Italy, surrendering only to World Champion Spain at seven minutes from the end of the game.


Nevertheless, this Paraguayan Berlusconi and the Red Bishop Lugo have something in common. Since 1887, the year in which the Liberal Party and the Colorado Party were founded taking their inspiration from the U.S. Democratic and Republican parties, most Paraguayans have been identifying with these two political formations with the fervor of a faith transmitted from fathers to sons. By family tradition, both Cartes and Lugo belong to the Colorados, although they both left their affiliation behind.


Lugo, who is the son of a peasant, became a Catholic priest (although later, while advancing in the ecclesiastical career rising to the rank of Bishop, he dedicated himself mainly to politics and to fathering illegitimate children). Cartes is the son of the Paraguayan dealer of Cessna aircraft. He went to the United States to study aircraft mechanics and then he devoted himself to building his personal fortune.
In 2008, the former Colorado and ex-red Bishop Lugo was chosen by the Liberal Party as their presidential candidate, mainly to attract the votes of the people who would have never brought themselves to vote for a Liberal candidate although they were tired of sixty-eight years of Colorado government.  He was actually elected, but after having fatally fallen under the influence of Venezuelan strongman Chávez, he began almost immediately to quarrel with his Liberal vice-President Federico Franco; until the Liberals themselves, in accordance with the Colorados, deposed him and replaced him with Franco for the last fourteen months of the presidency.

In the meantime, the alliance among the Liberals, the political left and the Hugo Chávez-phile forces had finally by 2009 convinced Cartes to get into the arena on the side of the Colorados. In the beginning the party resisted him. The chairwoman of the party, Lilian Samaniego, even rehashed some old accusations (which had never been proved) about Cartes’s complicity with drugs and cigarettes smugglers. Eventually Cartes was accepted, and his election turned into a triumph: Cartes got 45.84% of the votes, against 36.94% of the Liberal candidate Efraín Alegre, 5.88% of the moderate leftist Mario Ferreiro and 3.32% of the more radical Anibal Carrillo (although Carrillo got to third place in the general elections); among the five elected senators in the latter list there was also Lugo, who graciously offered his congratulations to Cartes.

“I never voted before, and I wasn’t even interested; but now I’m sorry for that,” responded Cartes to those who asked him about his past disinterest for the political process. He added: “I didn’t join the party to get rich. I already have everything of everything.”  Cartes is now the third member of a South-American club of tycoons heads of state who, together with Chilean president Sebastián Piñera and Panamanian Ricardo Martinelli, represent an answer to the populism of the late Venezuelan caudillo Chávez and his imitators, albeit still in terms of personal charisma. It has long been expected that they will be joined by the Argentine Mauricio Macri, the present Head of Government of the City of Buenos Aires.


Cartes, who is separated from his wife with whom he has a son and two daughters, is also famous for his numerous affairs with fashion models and TV personalities.  But, he has promised: “If I will be the next President, my Primera Dama will be the Motherland.”