The fire this time.

Besides the references to the controversial figure of Italian "monk" Enzo Bianchi and his opinions on the matter, that could escape non-Italian, non-Catholic readers (and probably will), the following article is interesting (I think) because it directs the attention of the readers to the political aspect of an act which, besides being repulsive in itself, is only apparently an individual selfless action, inspired by a religious belief (not to say that selflessness is necessarily good), but it is just another weapon in the panoply of warriors.
Your comments will be greatly appreciated.
Thanks,
Leonardo Pavese 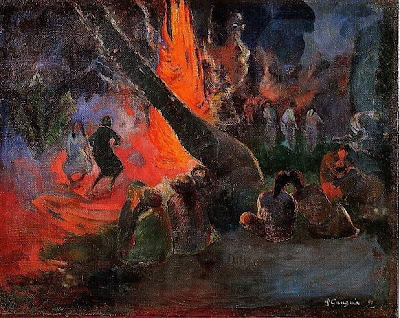 A Political Calculation.
By Roberto Dal Bosco
(Translated and edited by L. Pavese).

The self-immolations in Tibet, to protest the Chinese presence in the region, are continuing. Yesterday (4/25/2013), three new cases of monks and civilians who set fire to themselves were recorded. They were two monks and a woman, raising the total number of suicides, since 2009 (the year the protest began), to 118. The ruthless Chinese communist repression in Tibet, which has been going on since the military occupation of 1950, can not be certainly justified, but everyone should be aware that the self-immolation of the Tibetans is not a religious act. 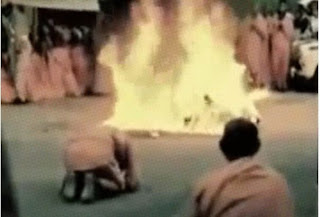 There is no lack of sympathy for the Tibetan cause, even in its suicidal aspect. In Italy, for example, Prior Enzo Bianchi caused quite a stir by his December 16, 2012 article “Non-Violent Fire” in the daily La Stampa.  He  wrote that the self-igniting monks
by their life and death, want to affirm the greatness of a religion and a culture which refuses to bow to evil.They want to show to whomever feels disheartened by oppression that sometimes strong gestures are made because it is right to do so; that there exist injustices that must be denounced at any cost: and there are values for which it is worth to dedicate one's life till death...The martyr who nourishes and covers himself with scents and incense to burn is making a total and free offer for everyone's salvation: he is not aiming exclusively at his own salvation, but to a renewal of the world.


Evidently, Enzo Bianchi ignores that the purpose of these suicides is eminently political. Being, the Buddhists bonzes, not very distant from the Islamic way of thinking, they feel they can dispose of the lives of their followers as sad pawns in the game of politics. (However, Tibetan Buddhists despise Islam, calling Muslims mlecchas, the enemies of dharma, who will be the first to be swept away in the apocalyptic Kalachackra Tantra).
Drugged, as we are, by the media strategy of Hollywood Buddhism, nobody here in the West is willing to admit that this deadly game doesn’t entail any respect for human life. In March 2008, right in the middle of the Tibetan protest against the Olympics in Beijing, Tsewang Rigzin, the newly elected president of the Tibetan Youth Congress, from his comfortable throne in the “exile capital”  of Dharamsala, India, accepted the idea that the evolution of the suicidal Tibetan tactics could soon turn into an attacking one: no more self-immolation of bonzes, but human bombs against the Chinese. “That would be a very possible development,” said the young Tibetan to the Italian reporter Lorenzo Cremonesi. “We’re open to everything (...) Therefore, soon, it could be time to change the strategy of the struggle”. ( The statement was reported in the article of the Italian daily Il Corriere della Sera, on 3/27/2008).

The Sino-Tibetan question is political, geopolitical. There is nothing spiritual to it, only the horror of a diabolic sacrifice.
In his La Stampa article, Bianchi attempted to evade the issue. “...and make no mistake, this form of protest did not arise in Viet Nam in the 1960’s to become widespread in China in these recent years.... It is a very ancient practice.... A telling account of it can be found in a chapter of the Lotus Sutra, which reveals that is never a rash act, but rather that a long ascetic process of purification, consisting of fasting and meditation, precedes the extreme sacrifice to donate oneself to the Buddha for the good of others.”

We’re sorry to disappoint the Prior of Bose, but unfortunately, in the present era, the Buddhist suicides have been mass-media related events since the beginning.
The first self-igniting bonze in fact was Thic Quang Duc (1897-1963). That image was shown one thousand times. An atrocious image. A snuff picture which, even now, is painful to watch, and the entire visual archive concerning Buddhist suicides with fire is nothing but a snuff sub-genre. The musical group Rage Against The machine made the picture into the cover of a very successful album. It is certainly a very powerful image. It is endowed with unique strength and the manipulating beauty of a fascinating death.
The genesis of this picture is very significative. Those were the times of the rebellion of the Buddhist monks in Viet Nam. They were complaining, most of all, against the favor the government of Catholic president Ngo Dinh Diem (1901-1963), in their judgement, accorded to Catholics.

In fact Catholics, very often, displayed their religious symbols, contrary to a law that forbade it. The Army turned a blind eye to Catholics. The soldiers, in fact, were for the most part Catholic, because the anti-communism of Christians was almost assured; while towards the threat from the north the Buddhists, as it suits the cult of the bonzes, kept a relativistic attitude.
There is no doubt that, besides having being infiltrated by the Viet Cong, a good portion of the Buddhists was also counseled by the C.I.A.; as Edward N. Luttwak revealed in his indispensable book, Coup d'État: A Practical Handbook.
The fact is that the monks, after various clashes with the security forces, found the right weapon to oust Ngo Dinh Diem. They planned the day of June 10, 1963 very carefully. The Buddhists told the foreign reporters to go to the Cambodian embassy. Then, after having set the stage, two young monks helped the elderly Thic Quanc Duc (1897-1963) to set fire to himself, actually preventing the soldiers from putting it off.


For the authors of articles and photographs of the event, that meant the Pulitzer Prize. It wasn’t long that a copy of The New York Times, with the burned-alive monk on the first page, reached the U.S. President’s desk. David Halberstram, in his book The Making of a Quagmire, tells that President Kennedy (1917-1963), when he saw the picture, swore and decided right then and there to withdraw any residual American backing to Ngo Dinh Diem. The rest is history: a spiral of dreadful violence ensued, with the mowing down of thousands of young American and Vietnamese lives; and destruction and demoralization on every side of the Atlantic and the Pacific Oceans.
The self-perpetrated Tibetan killings are in no way different from the Vietnamese ones. They are purely media-related acts. They are actions calculated by a lucid strategic brain, who resides in Dharamsala, and who doesn’t hold human life in great consideration. Every suicide in Tibet means a tear shed in the West, and one more point scored against the People’s Republic of China; besides the assurance of an increase of donations to the pro-Tibetan foundations spread throughout the world.
It is a shameful and horrid calculation. A political calculation; and in its own way a military one; to which not even the Dalai Lama seems to be extraneous: When he was interviewed, last year, the embodiment of compassion couldn’t think of anything better to say but: “It is sad, very sad. Really sad. But at the same time it is a hot issue, very political. I prefer to remain silent.”

The article by Roberto Dal Bosco was published on the Italian daily La Nuova Bussola Quotidiana, and it was translated and published here by permission.